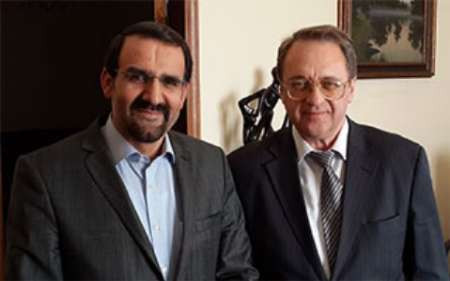 Iran’s Ambassador to Moscow Mehdi Sanaei and Russia’s Deputy Foreign Minister, President Putin’s top envoy for the Middle East, Mikhail Bogdanov met late on Wednesday in Moscow to discuss the latest development in the region, bilateral relations, and the latest events in Syria.

“The outlook of the US, the UK, and France about the use of chemical weapons in Khan Shaykhun by the Syrian government and issuing a UNSC resolution on it is totally unacceptable,” reiterated Mr. Bogdanov. “We will not accept the draft proposed by these three countries as it has a complete anti-Syrian essence.”

Mr. Sanaei referred to the visit of President Rouhani to Moscow and his meeting with President Putin and stressed that in addition to growing bilateral relations in all areas the two countries should concertedly exchange views on the issues of the Middle East.

The sides also conferred on the stances of their countries regarding the crises in Iraq, Yemen, and the other Middle Esatern countries.