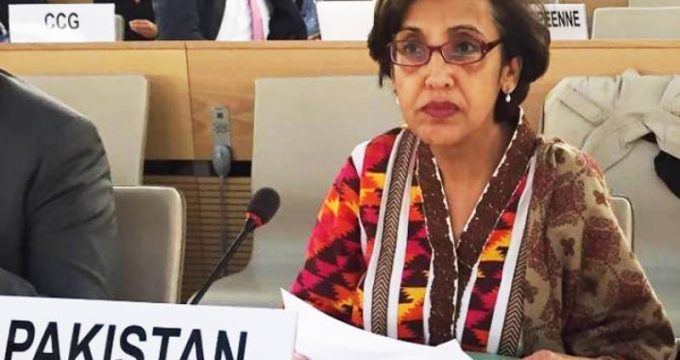 She reiterated Pakistan and Iran enjoy cordial and brotherly relations and have no border dispute between them.

She was speaking at the meeting of the National Assembly committee on foreign affairs, which met in Islamabad with Awais Ahmad Leghari in the chair.

Referring to former army chief General Raheel Sharif joining the Saudi-led military coalition, she said that any retired military officer is free to accept any job, but Raheel Sharif will not act against Iran as the head of the military alliance.

‘It is difficult for Pakistan to maintain equal relations with both countries, but Pakistan will not go against Iran’s interests,’ she assured the panel.

She said trade with Iran will touch new heights after easing of international sanctions on Iran.

Pakistan Tehreek-i-Insaf’s (PTI) member Shireen Mazari and Shah Mehmood Qureshi raised concerns that the statements of Pakistan foreign ministry regarding the Saudi military coalition are contradictory and said that Pakistan must make careful decisions regarding the alliance.

The PTI leaders were of the view that a tilt towards either side in Pakistan’s ties with Saudi Arabia and Iran is not advisable.

Meanwhile, ‘Qaumi Watan Party’ Chairman Aftab Ahmad Khan Sherpao questioned why Pakistan had agreed to become a member of the coalition without first finding out the aims and objectives of the alliance.

Earlier Pakistani defense minister Khawaja Muhammad Asif had said Pakistan will not be part of any coalition force which is based on sectarianism.

Two years ago Pakistan tried to mediate between Iran and Saudi Arabia and Prime Minister Nawaz Sharif and the then Army Chief General Raheel Sharif traveled to Riyadh and Tehran together in an attempt to bring the two countries close to each other.