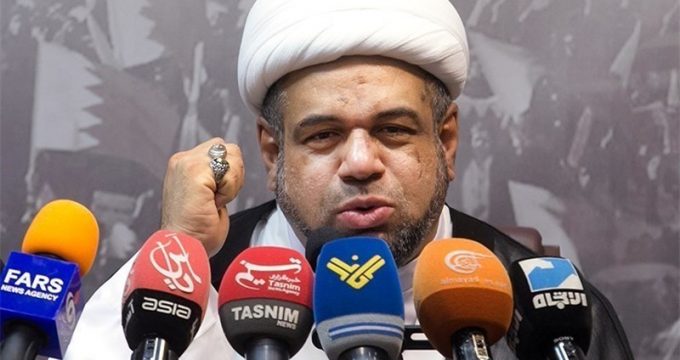 Press TV- The Bahraini regime has revoked the nationality of Sheikh Abdullah al-Daqaq, a representative of distinguished Shia cleric Sheikh Isa Qassim, and two other activists.

The court also imposed a 100,000-Bahraini dinar fine on Aradi.

Bahraini authorities have claimed that the rulings were issued against citizens who had joined terrorist groups and sought to create instability and insecurity in the country.

In a statement, Daqaq dismissed the ruling as baseless and said he would never recognize it.

He added that the verdict is against those who had demanded the restoration of the legitimate rights of the oppressed Bahraini people and are defending Sheikh Qassim.

The Bahraini regime’s major acts of violence against the people in recent days are not hidden from any political observer, he said.

Daqaq emphasized that someone with Bahrain as his motherland has no need to prove his nationality based on documents that the regime’s authorities would want to manipulate though various means.

In fact, those foreigners who have come to Bahrain and plundered its assets and carried out acts of bullying against the Bahraini people must prove their nationality, he said.

He added that the verdict would boost his resolve in campaigning for the fulfillment of the Bahraini people’s legitimate demands until achieving a final victory.

On March 14, a Bahraini court delayed the verdict in the case of top Shia cleric, Sheikh Isa Qassim.

The court had earlier set March 14 as the date to issue its ruling on Sheikh Qassim’s case, but it adjourned its decision until May 7.

On June 20, 2016, Bahraini authorities stripped Sheikh Qassim, the spiritual leader of the dissolved opposition bloc, the al-Wefaq National Islamic Society, of his nationality.

They later dissolved the Islamic Enlightenment Institution, founded by the clergyman, in addition to the opposition al-Risala Islamic Association.

Manama has spared no effort to clamp down on the dissent and rights activists. On March 14, 2011, troops from Saudi Arabia and the United Arab Emirates were deployed to Bahrain to assist the Manama government in its crackdown.