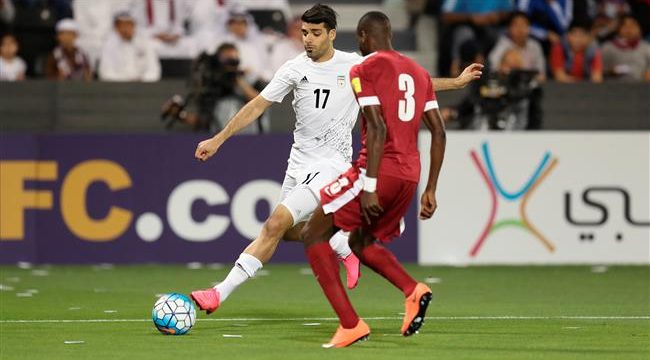 Press TV – The Iran men’s national football team, also known as Team Melli, inches closer to the 2018 FIFA World Cup after extending its unbeaten run in the Asian qualifying tournament with a victory over Qatar.

On Thursday evening, the Iranian outfit notched up a 1-0 win over the Maroons in a Group A fixture at the multi-purpose Jassim Bin Hamad Stadium in the Qatari capital city of Doha.

Team Melli carved out the better of the early opportunities. Professional footballer Sardar Azmoun, who has been praised for his aerial ability, creativity, and bursts of acceleration, rolled the ball just behind the 18-yard box in the third minute, and sent it on the right-hand side of Qatar box but to no avail.

Azmoun’s audacious strike three minutes later failed to find the hosts’ goal when Qatar goalkeeper Yasser Abou Baker made a save to deprive the Iranians of a goal. Iran’s striker Karim Ansarifard unleashed a shot after that, but Abou Baker could parry it.

Iran’s 23-year-old winger Milad Mohammadi received a yellow card in the 7th minute after he committed a foul on a Qatari footballer.

In the 23rd minute, the Maroons were awarded a free kick that attacking midfielder Rodrigo Barbosa Tabata sent wide of the goal and out.

Both teams went through ups and downs in their attempts to open the scoring, but were not able to produce a goal in the first half.

Iran eventually took the lead in the 52nd minute, when Ansarifard’s through ball found Mehdi Taremi, who plays as a forward for Persian Gulf Pro League club Persepolis, in space. The 24-year-old made no mistake and netted the winner.

Azmoun and Ehsan Hajsafi also enjoyed chances to double the Iranians’ advantage but failed to hit the target.

Iran is pitted against South Korea, Uzbekistan, China, Qatar and Syria in Group A of the third round of the 2018 FIFA World Cup qualification tournament.