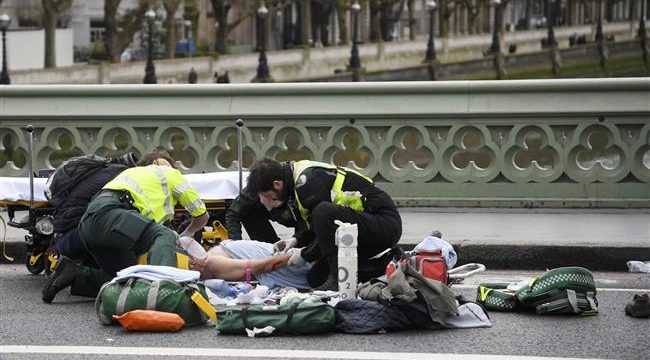 At least 4 killed, 40 injured in ‘sick and depraved terrorist attack’ outside British Parliament

Los Angeles Times – A lone assailant struck at the heart of London on Wednesday, mowing down pedestrians with a car and then fatally stabbing a police officer outside Britain’s Houses of Parliament in an apparent terrorist attack that took place on the anniversary of twin bombings in Brussels.

Five people were reported dead in the attack, including the police officer and the assailant, and at least 40 were injured. Tobias Ellwood, the Foreign and Commonwealth Office minister, had administered CPR to the officer as he lay on the sidewalk, but it was ultimately not enough.

FROM OUR PARTNERS:Palm Beach Doesn’t Want To Pay For His Mar-A-Lago Visits
Prime Minister Theresa May was at Parliament at the time and was rushed away in the back of a silver Jaguar. Speaking to journalists later outside her residence at 10 Downing St., May condemned what she described as “a sick and depraved terrorist attack.”

“The location of this attack was no accident,” she said. “These streets of Westminster – home to the world’s oldest Parliament – are engrained with a spirit of freedom that echoes in some of the furthest corners of the globe. And the values our Parliament represents – democracy, freedom, human rights, the rule of law – command the admiration and respect of free people everywhere.”

May pledged that lawmakers would meet Thursday and Londoners would go about their day as usual, “never giving in to terror and never allowing the voices of hate and evil to drive us apart.”

Mark Rowley, acting deputy commissioner at London’s Metropolitan Police, told reporters that it appeared there was only one attacker, “but it would be foolish to be overconfident early on.”

Rowley declined to identify the attacker but said authorities believe they know who he was, and the working assumption is that he was inspired by “Islamist-related terrorism.”

It was the latest in a string of deadly attacks that have struck major cities in Europe over the last two years, including Paris, Nice and Berlin. It came as Belgians were commemorating last year’s coordinated suicide bombings, which killed 32 people and injured more than 300 others at the Brussels airport and a subway station.

Wednesday’s attack played out around some of the most iconic sites in Britain, including Westminster Bridge, where the car plowed into pedestrians; the River Thames, where one woman was rescued after either jumping or being knocked off the bridge; and Parliament, whose Gothic Revival buildings have long stood as a symbol of representative government worldwide.

Witnesses reported hearing a commotion, shouting and the sound of gunfire when the car crashed into a railing. A man, who was reportedly clad in black and wielding what was described as an 8-inch knife, then exited the vehicle and ran toward Parliament, where he was confronted by police.

Officers shot and killed the assailant during the confrontation.

Images shared widely on social media showed Ellwood trying to revive the unarmed officer who was injured in the encounter and applying pressure to his wounds. Ellwood lost his brother, Jon, in a 2002 bombing attack that killed more than 200 people in Bali, Indonesia.

Authorities identified the police officer who was killed as Keith Palmer, 48, a husband and a father.

Police declared the attack a terrorist incident and locked down Parliament for hours while they conducted a search to make certain that no other assailants were in the area.

“This is a day that we had planned for — that we all hoped would never happen — but sadly it is now a reality,” Rowley said.

Parliament staff and lawmakers in the area were told to stay inside their offices, and a session of the House of Commons was suspended.

“I am locked in my office with other MPs and frightened young researchers,” Michael Fabricant, a Conservative Party lawmaker, said on Twitter. “We have broken open a bottle of whiskey.”

Jonathan Ashworth, a member of Parliament from the opposition Labor Party, said he was working in his fifth-floor office in Portcullis House when his phone rang Wednesday afternoon. It was his wife calling to check on him, and asking whether he had heard the news.

Ashworth rushed to look out his window, which overlooks New Palace Yard. There he saw a car up on the sidewalk, and a flood of paramedics trying to resuscitate someone on the ground. Police carrying guns swarmed the area.

Moments later, security officers banged on his door, yelling, “We have to evacuate straight away!” Ashworth was taken with four staffers to wait in an atrium and were later moved to another building.

“Thousands of people work here, and thousands of people come here every day — we’re all in absolute shock,” he said. But he added, “We will not let this defeat our values of democracy and justice and freedom.”

David Anderson, another Labor Party lawmaker, said roughly 300 people were locked down in and around the House of Commons chamber, some watching the news on a television in the lobby.

“Everyone is calm but very concerned,” he said via email. “Our phones etc. are working intermittently so some problems responding to friends and families who are worried for us.”

Police and witnesses on Westminster Bridge described the car striking pedestrians, including three police officers who were returning from a commendation ceremony. Bodies of the dead and injured were left scattered along the length of the bridge.

One witness, identified as former Polish Foreign Minister Radoslaw Sikorski, told the BBC he was driving along Westminster Bridge in a taxi at the time.

“I didn’t see the car, but I heard what I thought was just a collision,” he said. “Then I looked through the window of the taxi and I saw someone down, obviously in great distress. Then I saw a second person down. Then I saw three more people down, one of them bleeding profusely.”

A doctor at a nearby hospital told Britain’s Press Assn. that a number of people suffered “catastrophic injuries” in the attack.

The victims included students and visitors from a number of countries.

The French government said it was sending a plane to London on Wednesday evening with the families of three French students who were among the injured. Romania’s Foreign Ministry said two of its nationals had also been taken to a hospital for treatment.

Several students on a field trip from Edge Hill University in Ormskirk were also injured, the British university said in a statement.

The woman in the river was pulled out, alive but injured, said Martin Garside, a spokesman for the Port of London Authority.

Police blocked off roads and bridges throughout the area, as emergency responders sped by with sirens blaring and lights flashing.

A helicopter hovered noisily overhead, and the giant Ferris wheel known as the London Eye stood motionless in the distance.

Rowley said officers — some armed and others not — would be patrolling the country in greater numbers in coming days and urged members of the public to remain vigilant.

He also said: “We must recognize now that our Muslim communities will feel anxious at this time given the past behavior of the extreme right wing, and we will continue to work with all community leaders in the coming days.”

The threat level in Britain was already listed as severe, meaning that an attack is “highly likely,” and authorities said it would remain at that level.

London has in the past been the target of numerous terrorist attacks, including IRA bombings in the 1970s and ’80s and a 2005 attack in which Al Qaeda-inspired assailants blew themselves up on three subway trains and a bus in London, killing 52 people.

Until Wednesday, however, the city had largely escaped the latest wave of Islamist-inspired attacks sweeping through Europe.

“I want to reassure all Londoners and all our visitors not to be alarmed,” said London Mayor Sadiq Khan. “Our city remains one of the safest in the world. London is the greatest city in the world, and we stand together in the face of those who seek to harm us and destroy our way of life. We always have and we always will.”

Government officials from Italy to Australia said they were assessing the security threat in their countries after the attack.

In Washington, President Trump was briefed on the situation in London and spoke with the British prime minister, White House Press Secretary Sean Spicer told reporters.

“The city of London and her majesty’s government have the full support of the U.S. government in responding to the attack and bringing those to justice who are responsible,” he said.

U.S. Secretary of State Rex Tillerson, who was hosting his British counterpart, Boris Johnson, in Washington at a meeting on the global fight against Islamic State, condemned the attack but stopped short of referring to it as a terrorist act.

“On behalf of the United States, I express my condolences to the victims and their families,” Tillerson said. “We condemn these horrific acts of violence, and whether they were carried out by troubled individuals or by terrorists, the victims know no difference.”