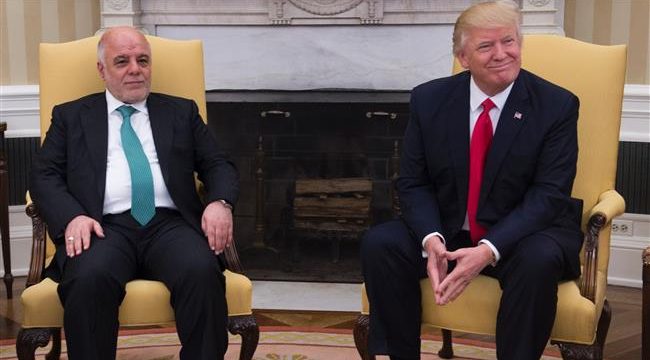 Iraqi PM snubs US pressure to move away from Tehran: Lawmaker

IRNA – An Iraqi lawmaker said here on Wednesday that Iraqi Prime Minister Haider al-Abadi has refused to distance himself from Iran under pressure excreted on him from Washington.

Touching upon the recent visit of al-Abadi to Washington, the representative of the National Coalition at the Iraqi parliament, Habib al-Tarafi, said the Iraqi PM has called for maintaining balanced relations with all neighboring countries during the visit, Iraqi news agency Almaalomah reported.

The Iraqi lawmaker underlined that the presence of US troops in Iraq after uprooting the Daesh terrorist group and the conditions for presence of US military advisers in Iraq were among the issues discussed during the meeting between al-Abadi and US President Donald Trump in Washington.

Al-Tarafi did not further elaborate on the Iraqi PM’s visit to the United States.

Prior to al-Abadi’s visit to Washington, some experts and mass media had predicted that the American officials wanted to put more pressure on Iraqi PM to create new regional alignments to move away from Tehran and the resistance axis and instead, join the American – Zionist – Saudi Arabia axis.

The visit to Washington by the Iraqi Prime Minister and his accompanying delegation took place on March 20.