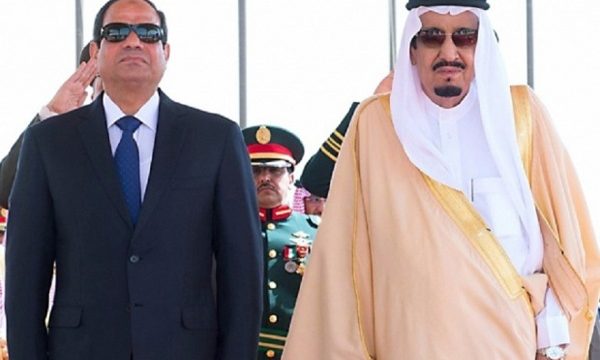 Cairo and Riyadh have sharp differences on several issues across the region especially the crisis in Syria where the two sides have been at odds. The increasing proximity between Egypt, Iraq, Lebanon and Syria has increased tension between Cairo and Riyadh with the two sides now engaging in unofficial cold war. The latter three countries are part of the resistance front battling Saudi-backed Takfiri terrorists across the region. There have been several media reports that Egypt has dispatched its special forces, including air force pilots, to assist the Syrian government in its war on terror. However authorities in Cairo have denied any such deployment.

Egypt has come out openly to oppose Saudi policies vis-à-vis the Syrian crisis with President Abdel Fatah El Sisi expressing, in an interview last November, his support for the Syrian military. That position came after the UN Security Council voted on two rival resolutions last October. One was drafted by France demanding an end to airstrikes and the implementation of a no-fly zone over Syria, while the Russian resolution urged for a ceasefire but made no mention of the French clause. Egypt supported the Russian resolution which was also backed by China, and Venezuela while opposing French resolution. The Saudi regime was angered by the Egyptian decision and immediately halted shipments of oil products to the North African state under a $23 billion deal for indefinite time.

In an apparent reciprocal move, an Egyptian court in January upheld a ruling that said the government cannot transfer control of two key Red Sea islands to Saudi Arabia thus widening the rift between the two sides.

Last February, in a move that further angered the Saudi regime and other Persian Gulf monarchies, Egypt’s parliament urged Arab countries to allow Syria to take back its seat at the Arab League. Syria was suspended from the pan-Arab body in 2011 following a crisis which was ignited by foreign-backed terrorist and militant groups. Algeria, a major power in the Arab world, has also backed Egypt position of readmitting Syria to the Arab League.

On the sidelines of last year’s UN General Assembly in New York, El-Sisi held a bilateral meeting with Iraqi Prime Minister Haider Al-Abadi, and praised Iraqi forces operations against ISIS terrorists. In a sign of strengthening of bilateral ties between the two countries, last February, the Iraqi Oil Marketing Company SOMO signed a contract for oil exports with the Egyptian government. Iraq will therefore fill part of the shortfall created by Saudis reneging on their pledges following Egypt’s independent stances. There have been reports that Egypt is also interested in purchasing Iranian oil with little details available on the expected deal between the two countries. There have been signals from Tehran and Cairo pointing towards thawing of ties between the two sides with the latest being  a meeting between the  Chairman of Iran Majlis (Parliament) National Security and Foreign Policy Committee Alaeddin Boroujerd and Egypt’s Interest Section in Tehran Yaser Othman.

Egypt is also closely coordinating its Syria policy with Lebanon which borders the war-torn country. In mid-February, Lebanese President Michel Aoun visited Cairo and held wide-ranging talks with his Egyptian counterpart El-Sisi with Syria being top on the agenda. Aoun’s stances on Syria and Hezbollah resistance movement have angered Riyadh with the Saudi King cancelling his scheduled trip to Lebanon.

On Yemen, while Egypt continues to be officially in the Saudi-led coalition carrying out a bloody aggression on the impoverished state, participation by Cairo has been lukewarm and mostly a formality with no active involvement in combat operations.

Following their anger towards Egypt’s independent stances some Persian Gulf monarchies had mulled boycotting the recent Arab League foreign ministers meeting in Cairo. There have been some diplomatic efforts by the United Arab Emirates to mediate between Riyadh and Cairo but have not been successful. Kuwait has also expressed concern over the worsening of ties between Saudi Arabia and Egypt and has rejected demands by Riyadh to halt their financial support for Cairo. The Saudi regime is therefore becoming more isolated as many Arab countries move to consolidate ties with Egypt.

Therefore, Cairo is gaining and upper hand as it seeks reasserting its traditional leadership status on the Arab word. Egypt, by virtue of hosting the highest seat of learning in Sunni Islam, the al-Azhar University, also occupies an elevated position among Muslims worldwide, a status the Saudis have been eager to weaken. This new reemerging Egypt with independent political decision is bound to anger some Persian Gulf monarchies especially Saudi Arabia which has unsuccessfully tried to front itself as the undisputed leader of the Arab.