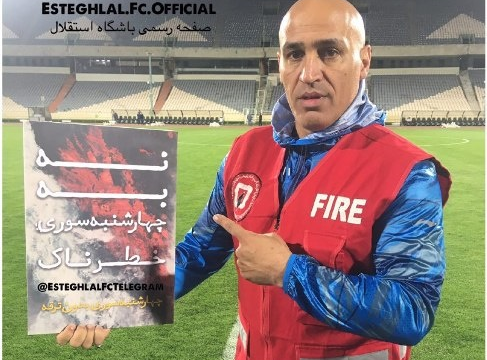 Iranian people warned against use of dangerous firecrackers

IFP- Head coach of a popular Iranian football club has advised people to take necessary precautions on Chaharshanbeh Soori, a fire festival held on the eve of the last Wednesday of the Iranian calendar year, and do their best have a good time instead of endangering their lives.

The head coach of the Iran Pro League club Esteghlal Tehran, Alireza Mansourian, has published a photo of himself in social media urging people to avoid endangering their lives on Chaharshanbeh Soori, a fire festival held on the eve of the last Wednesday of the Iranian calendar year (which – this year – ends on March 20), and instead enjoy their time by celebrating the night.

Some people celebrate Chaharshanbeh Soori by exploding dangerous firecrackers and detonating explosives which can, sometimes, lead to disastrous events.

The photo shows Mansourian wearing a firefighter’s outfit and holding a piece of paperboard on which it is written: “Say no to dangerous Chaharshanbe Soori. Merriment yes. Danger no.”