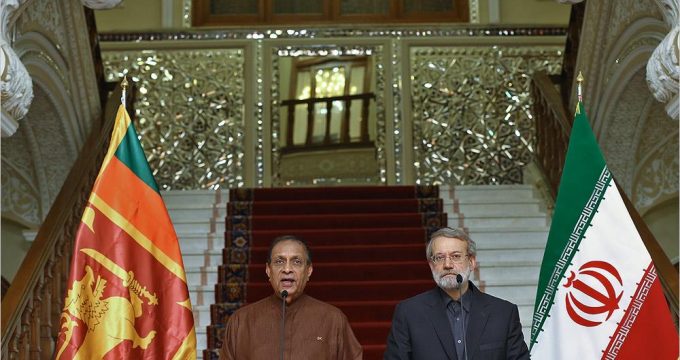 Tasnim– Sri Lanka’s Parliament Speaker Karu Jayasuriya voiced his country’s determination to pay off its debts to Iran, unpaid since the time of anti-Iran Western sanctions.

Speaking at a joint press conference with Iranian Parliament Speaker Ali Larijani in Tehran on Saturday, Jayasuriya said they discussed a range of issues in a meeting in the morning, including ways to clear Sri Lanka’s debts to Iran, which have remained unpaid since the sanctions era.

Expressing the hope for finding a final solution to the issue of settling the debts, the Sri Lankan speaker said his country is eager to expand economic relations with Iran.

Highlighting the close cooperation between Colombo and Tehran within the framework of the Non-Aligned Movement (NAM) and the Asian Parliamentary Assembly (APA), Jayasuriya invited his Iranian counterpart to pay a visit with a parliamentary delegation to the South Asian country.

For his part, the Iranian speaker hailed the close parliamentary and economic ties between the two countries, saying the bulk of talks with the Sri Lankan speaker earlier in the day revolved around enhancement of bilateral economic relations.

Larijani further stressed the need for plans to enable Iranian contractors to provide Sri Lanka with technical and engineering services and help Iranian businesspeople boost exports to and imports from Sri Lanka.

In an October 2016 meeting with his Sri Lankan counterpart Maithripala Sirisena, Iranian President Hassan Rouhani offered help to Sri Lanka to carry out projects for development of the South Asian nation.

The two heads of state met on the sidelines of the 2nd Asia Cooperation Dialogue (ACD) Summit in Thailand.