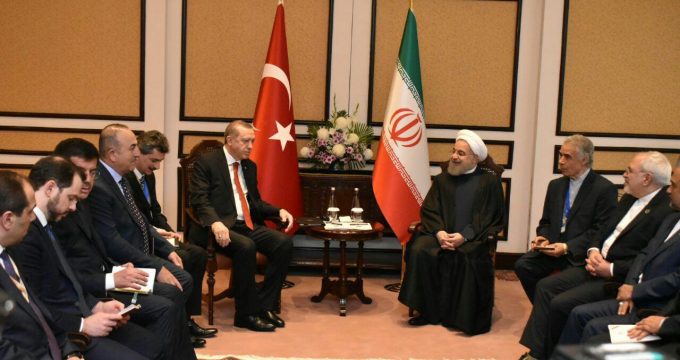 Rouhani urges respect for states’ sovereignty in meeting with Erdogan

Press TV- Iranian President Hassan Rouhani has urged respect for the territorial integrity of regional countries, including Iraq and Syria.

“The Islamic Republic of Iran stresses respect for the territorial integrity of regional countries and is against any violation of territorial integrity in the region, especially in Syria and Iraq,” Rouhani said during a Wednesday meeting with his Turkish counterpart Recep Tayyip Erdogan.

The meeting was held on the sidelines of the Economic Cooperation Organization (ECO)’s 13th plenary session in Pakistan’s capital Islamabad.

The Iranian president reaffirmed Tehran’s support for dialogue and mutual respect to settle differences, adding, “We should make efforts to immediately put an end to war, bloodshed and foreign interference in the region.”

Last December, Turkey deployed some 150 soldiers, equipped with heavy weapons and backed by about two dozen tanks, to the outskirts of the Daesh-held Iraqi city of Mosul.

Ankara claimed the deployment was part of a mission to train and equip Iraqi Kurdish forces in the fight against Daesh. Baghdad denounced the move as a breach of its sovereignty.

In January, Iraqi Prime Minister Haider al-Abadi said that an agreement had been reached with Turkey over Baghdad’s demand that Turkish forces withdraw from the Bashiqa camp near Mosul.

Back in August 2016, Turkey also launched an incursion into Syria, claiming that it was meant to engage both Daesh terrorists in the Syrian-Turkish border area and Kurdish forces, who were themselves fighting Daesh. Damascus condemned Turkey’s military intervention as a breach of its sovereignty.

Elsewhere in his remarks, Rouhani described Iran and Turkey as two instrumental countries of the region and called for further Tehran-Ankara cooperation in all sectors, which he said would benefit the two states as well as regional peace and stability.

He said that the two countries could expand ties in the sectors of energy, transportation and banking, and welcomed setting up joint ventures by investors from the two states.

Erdogan, for his part, said that Tehran-Ankara cooperation was essential to the settlement of regional woes and anti-terror fight.

He also said that Turkey embraced the promotion of ties with Iran.

On the sidelines of the ECO meeting, the Iranian president also held a meeting with Pakistani Prime Minister Nawaz Sharif, during which the two officials discussed a variety of issues, including the promotion of bilateral ties.

Rouhani said that Iran was ready to fulfill the energy needs of Pakistan, including Islamabad’s growing demand for electricity.

He also called for more cooperation between the private sectors of the two countries with a view to boosting bilateral trade to $5 billion.

The Iranian president said that Tehran and Islamabad needed to work together to ensure security for the two countries’ border regions against any potential terror acts.

Sharif, for his part, called for all-out cooperation with Iran, which he said would benefit the two countries.