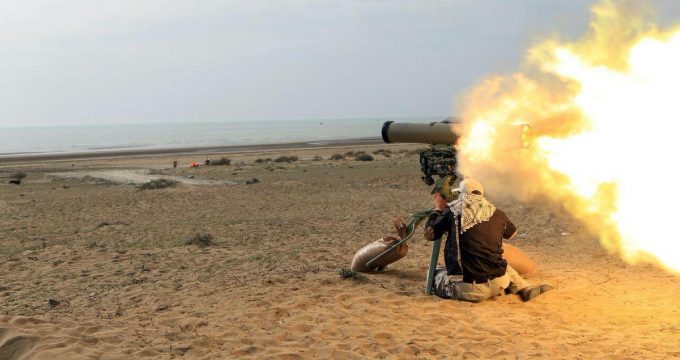 Sputnik– Iran is conducting the large-scale Velayat 95 naval drills which kicked off on February 13 and will continue until March 1 with its final stage due in the Strait of Hormuz, the Sea of Oman and the Indian Ocean’s northern area.

In an interview with Sputnik Persian, Mosib Naimi, Iranian political analyst and head of Iranian newspaper Al-Vafagh, specifically focused on why Tehran decided to stage its large-scale naval drills in the Indian Ocean.

The main objective of Velayat 95 is “to help provide the highest level of the Iranian military’s combat readiness in order to protect Iranian territory from any potential external threat,” according to Naimi.

Also, he referred to Tehran’s concern over a number of Gulf States’ push for creating an anti-Iranian military coalition, something that Naimi said is supported by the West.

He added that by holding the Velayat 95 drills, Iran is sending a message of peace, friendship and regional security guarantees to other countries.

Separately, Naimi cited pirates who are still in place in the Red Sea and the Strait of Oman, where merchant shipping is under serious threat.

“A significant number of Iranian merchant ships were damaged by pirates operating there. It is a pretext for Iran to develop an appropriate strategy to ensure security in these dangerous waters. Besides, it is worth mentioning that there are major oil transportation routes in this area; if these waters are unsafe, the economic security of the entire region will come under threat,” he said.

Naimi stressed that “all Iran’s military activity in the Gulf of Oman, the Persian Gulf and basins adjacent to the Indian Ocean is aimed solely at ensuring security, especially in our country.”

“In addition, it can also be seen as a friendly message of Iran’s drive to maintain regional security to neighboring countries,” he pointed out.

Touching upon speculation regarding the creation of an anti-Iranian coalition consisting of Arab countries, Naimi slammed it as “nothing but information propaganda aimed at intimidation.”

“This scenario is unlikely to happen because the opening of a military front will be to the detriment of all the countries in the region and beyond which will be involved a bloody game. No one is interested in it,” he said.

Naimi added that “everyone knows perfectly well that the Gulf’s security is of strategic importance to the whole world,” and that even though there is no cause for concern about hostilities, “information warfare has been in full swing for several years.”

“Fortunately, these efforts by the United States and its Arab allies have so far failed,” he wrapped up.