Financial Tribune- World renowned Iranian filmmaker Asghar Farhadi won the Oscar for the best foreign language film at the 89th Academy Awards, which turned into a platform for censuring President Donald Trump’s behavior and decisions in the past five weeks since he took office.

American actress Shirley MacLaine, 82, announced the name of the winner of the category, saying, “And the Oscar goes to ‘The Salesman’, Asghar Farhadi.” 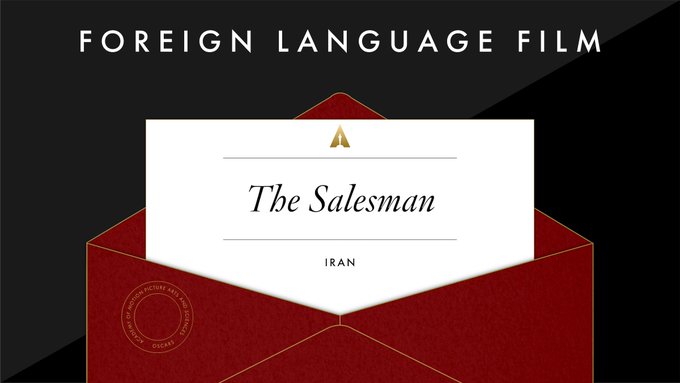 And the Oscar goes to…

World renowned Iranian filmmaker Asghar Farhadi won the Oscar for the best foreign language film at the 89th Academy Awards, which turned into a platform for censuring President Donald Trump’s behavior and decisions in the past five weeks since he took office.

American actress Shirley MacLaine, 82, announced the name of the winner of the category, saying, “And the Oscar goes to ‘The Salesman’, Asghar Farhadi.”

Iranian-American astronaut Anousheh Ansari, 50, and Firouz Naderi, 70, a former director at NASA, went on stage to accept the Oscar statuette on behalf of Farhadi, from South African-American actress Charlize Theron.

“I’m sorry I’m not with you tonight. My absence is out of respect for the people of my country and those of other six nations who have been disrespected by the inhumane law that bans their entry to the US,” Ansari said, reading Farhadi’s statement to the great roar of applause that broke out from the crowd.

It was a sign of solidarity among the cinema community in protest against the unfair executive order by Trump which banned residents of seven majority-Muslim countries to enter the US and indicated their support of Farhadi, 44, who boycotted the Oscars in a snub to the decision.

“Dividing the world into the ‘us’ and ‘our enemies’ categories creates fears; a deceitful justification for aggression and war. These wars prevent democracy and human rights in countries which have themselves been victims of aggression,” Farhadi’s statement said further.

Noting that filmmakers can turn their cameras to capture shared human qualities and break stereotypes of various nationalities and religions, his message ended by underlining, “they create empathy between us and others, an empathy which we need today more than ever.”

Held in Los Angeles, February 26, the ceremony was hosted by comedian Jimmy Kimmel who made ironic remarks about Trump from the start to the end of the program.

Reacting to Farhadi’s statement, the Playlist website wrote in a tweet, “the best speech of the Oscars might be from someone who isn’t even there,” and called it “inspiring”.

London Mayor Sadiq Khan, who organized a free screening of ‘The Salesman’ at Trafalgar Square in London before the Oscar ceremony where about 10,000 people gathered to see the movie, also congratulated Farhadi on his Facebook page.

Answering reporters’ question after the ceremony, Naderi explained the reason why Farhadi selected the two representatives. Naderi is a former director of Solar Systems Exploration at NASA and Ansari is the first female space tourist. “There are quite a number of prominent Iranian-Americans that he could have asked, actors and actresses,” Naderi said, “but by choosing the two of us, he wanted to convey the message that if you go away from the Earth and look back at it, you don’t see any of the borders and see one whole beautiful earth.”

Responding to the query how difficult it was for Farhadi not to come to the ceremony, Naderi said, “when you want to stand on your principles, you have to make hard choices and he just made one.”

Another figure who could not attend the ceremony was the Syrian cinematographer Khaled Khateeb, 21, who filmed ‘The White Helmets’ which won the best short documentary award. It is about the Nobel Peace Prize-nominated heroes who saved more than 60,000 civilian lives in Syria.

Many of the celebrities on the red carpet wore blue ribbons signifying support for the American Civil Liberties Union’s s new ‘Stand with ACLU’ initiative.

Launched this week, the campaign encourages Hollywood stars to wear the blue ribbon as a symbol of solidarity with the nonpartisan, nonprofit organization, which has worked for nearly 100 years to defend and protect individual rights and liberties guaranteed by the US Constitution and law of the land.

Support for the ACLU has increased exponentially in the last few weeks in the wake of Trump’s controversial immigration ban.

‘Moonlight’ won the best picture award with three statuettes. Mahershala Ali became the first Muslim actor to win an Oscar for his role in ‘Moonlight’. He won the Academy Award for best supporting actor for his portrayal of a drug dealer in the film, Telegraph website reported.

Ali, 43, is an African American actor who was a first-time nominee in the event.

‘La La Land’ claimed six awards out of 14 nominations, ‘Manchester by the Sea’ and ‘Hacksaw Ridge’ each collected two awards, and 11 films won one award each.

The most dramatic moment in the history of the Academy Awards was when for the last award of the night, ‘La La Land’ was announced as the best film winner, but then had to hand the award over to ‘Moonlight’ after the mistake was noticed.

In extraordinary scenes, the ‘La La Land’ team was halfway through their victory speeches, when it was noticed that the wrong film name had been read out by actor filmmaker Warren Beatty, 79, and that ‘Moonlight’ was actually the winner.

“There’s a mistake. ‘Moonlight’, you won best picture,” Fred Berger, the ‘La La Land’ producer announced to the gasps of a shocked crowd. He held up the card clearly showing the winner was ‘Moonlight’.

The stars and crew of ‘La La Land’ shuffled off the stage and handed their gold statuettes to a jubilant ‘Moonlight’ team.

Beatty said he had been given the wrong envelope to open. “I opened the envelope and it said Emma Stone, La La Land,” he said, adding he had not done it “to try to be funny.”