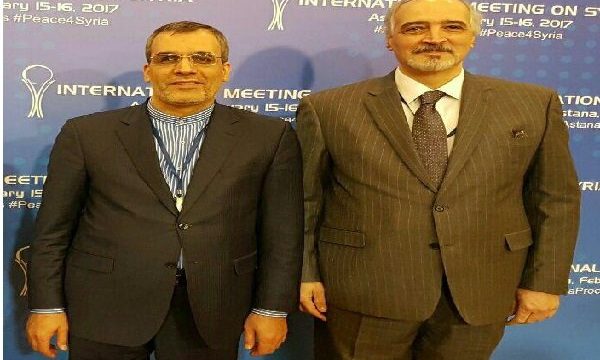 MNA– Iran and Syria have held 2nd round of bilateral talks to address Astana’s third round of Syrian peace negotiation.

Mr. Hossein Jaberi Ansari, Head of Iranian delegation to talks and Mr. Bashar al-Jafari, Syrian permanent envoy to the UN discussed the latest developments in Astana talks and on the ground in Syria.

Expert sessions and multilateral meetings were being held on Tuesday and Wednesday and will continue to Friday evening.

The first round of Astana talks on Syrian settlement was held in the Kazakh capital January 23-24 2017 with participation of delegations of Iran, Russia, and Turkey as observers and representatives of Syrian government and a number of armed opposition groups. A second meeting was held on February 6 at the experts level.