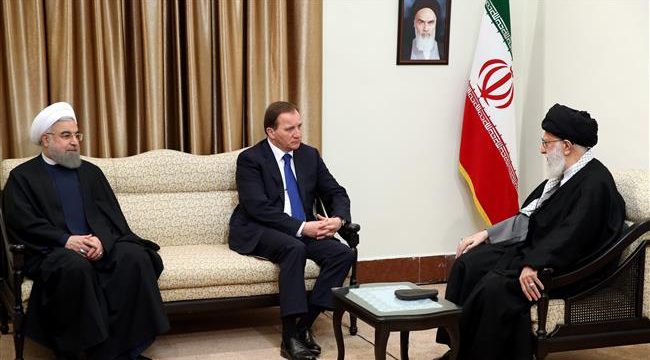 Reuters-Reuters- Iran’s supreme leader said on Saturday the United States and Western powers are regarded with suspicion in the Middle East because of their interference, but that Sweden has a good name among Iranians and is seen as a reputable economic partner.

Iran has had relatively good relations with neutral Sweden which has over the years been often critical of the foreign policy of the United States, the Islamic republic’s arch-enemy.

“America and many European powers have played a role in causing traumatic events in Syria and Iraq, and the people of the region are aware of this interference and are rightly skeptical,” state TV quoted Ayatollah Ali Khamenei as saying at a meeting with visiting Swedish Prime Minister Stefan Lofven.

“Due to its long relationship with Iran, Sweden is a country with a good reputation in the eyes of our people, and the optimism of nations towards each other will be fertile ground for developing cooperation,” Khamenei was quoted as saying.

During Lofven’s visit, the two countries signed initial accords on cooperation in areas including science and technology, higher education and research, roads, telecommunications, technology, and women and family.

Khamenei said many agreements Iran had signed with foreign countries had not been realized, however, and he expressed hope that would not also be the case with Sweden.

“We know you to be a man of action and hope you will act in a way so the accords do not just stay on paper,” Khamenei told the Swedish prime minister.

Lofven said the talks addressed “economic relations and important regional problems, and we will try to implement the agreements”.

The Swedish prime minister told Swedish journalists the subject of human rights was brought up. Among the issues are the fate of Ahmadreza Djalali, a researcher at Swedish medical university Karolinska Institutet who is imprisoned in Iran and at risk of a death sentence, according to Amnesty International.

Lofven also met President Hassan Rouhani, who praised “Swedish moderation” in international affairs – especially its support for Iran’s negotiations with world powers which led to a 2015 deal to curb Tehran’s nuclear program in exchange for a removal of economic sanctions against the Islamic republic.