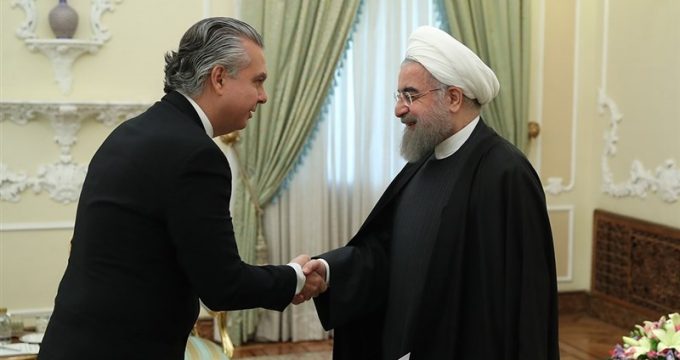 Tasnim– Iranian President Hassan Rouhani stressed the need for Tehran and Brasilia to facilitate banking relations in a bid to boost trade exchanges between the two sides.

The Islamic Republic of Iran sees no obstacle to the promotion of its relations with Brazil, President Rouhani said Sunday in a meeting in Tehran with new Brazilian Ambassador to Iran Rodrigo de Azeredo Santos.

“Iran attaches significance to its cooperation with Brazil, as a big country with a considerable economy in South America, and is willing to promote the level of cooperation,” he said.

The president further highlighted the importance of efforts to facilitate banking relations between the two countries and expressed the hope that the ties would gain serious momentum in various fields, economy in particular.

The Brazilian diplomat, for his part, emphasized that his government considers Iran as a reliable partner and is seeking to establish strategic economic ties with the Islamic Republic.

The relations between Iran and Brazil date back to 1903. In 1957, they signed a cultural agreement, which came into force in 1962. The agreement marked the elevation of the Brazilian legation in Tehran to the condition of the embassy.