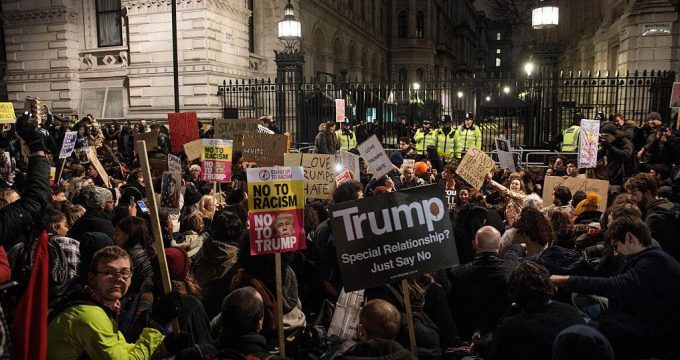 Reuters– Several thousand people demonstrated outside the U.S. embassy in London on Saturday against President Donald Trump and his temporary ban on refugees and nationals from seven Muslim-majority countries from entering the United States.

Protesters held black banners with blood stains bearing slogans such as “No to Trump. No to War” and “Trump: Special Relationship? Just say no.” at the demonstration against the ban and Trump’s foreign policy.

Trump signed an order just over a week ago putting a four-month hold on allowing refugees into the U.S. and temporarily barred travelers from Syria and six other Muslim-majority countries.

On Friday, a Seattle judge blocked the order but many in Britain are angry about the measure, which they see as discriminatory, and the time it took for Prime Minister Theresa May’s government to criticize it.