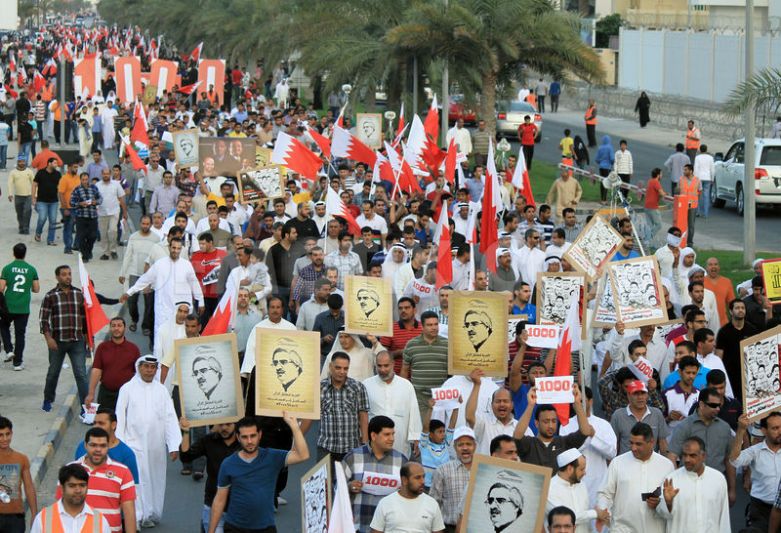 Early Thursday Bahraini regime forces brutally attacked supporters of a prominent Shiite Muslim scholar with some sources confirming that one of the protestors  was tortured to death.

Footage released on Thursday showed masked forces attacking Diraz, the native village of Ayatollah Sheikh Isa Qassim, and shooting at the protesters, who were out on the streets again ahead of his trial.

Since June last year, anti-regime demonstrators have been protesting in front of Sheikh Qassim’s house in Diraz after authorities revoked his citizenship over claims  of sowing sectarian discord.  Sheikh Qassim has categorically has denied the trumped up charges.

Since the beginning of the sit-in, the Bahraini regime has tightened security around Diraz. Security has set up checkpoints into area staffed with police who prevent non-Diraz residents from entering.

Protests have spread across Bahrain including in Juffair, Hamala, Sanabis, al-Markh and Sitra, to express support for the fellow countrymen protesting in Diraz.

Meanwhile, Bahraini Islamic scholars on Friday issued a statement declaring that defending Sheikh Qassim is a religious duty. According to al Lulu website, the Islamic scholars urged Bahrainis to continue their peaceful protests against the ruling regime and calling on everyone to take part in demonstrations across the country in protest at the regime’s brutality with the motto of “We Will Defend Our Religion and Our Dignity”.

Elsewhere, Bahrain Mirror website has reported that the young men who were detained by civilian regime militia on the dawn of Thursday (January 26, 2017) are held in the Criminal Investigations Department building.

Former al-Wefaq MP Ali al-Aswad, wrote in a post on “Twitter” that “the same militias that shot young man Mostafa Hamdan, have detained 7 citizens, who are currently held in the Criminal Investigations building, and there is no need to fabricate news”. He stressed that the armed men are affiliated with the Bahraini regime.

According to information released under Freedom of Information, Britain gave its close military ally and arms customer Bahrain £2.1 million from its Conflict, Stability and Security Fund (CSSF) in 2016.

In November, Britain’s Prince Charles opened the Mina Salman military base in Bahrain. While it will be used by the UK military, the Royal Navy port was built largely with Bahraini tax payers money.

Last December Britain’s Prime Minister Theresa May visited Bahrain and other Persian Gulf kingdoms, rubbishing international calls to cancel the trip due to extensive human rights violations by the sheikhdoms.

Bahrain which also hosts the US Navy’s 5th Fleet, has been facing incessant of anti-regime demonstrations since the start of the Islamic Awakening movement across the region mid-February 2011.

Many innocent people have been killed or executed and hundreds of others wounded or detained illegally by the Manama regime which is also backed by neighboring repressive Saudi regime.