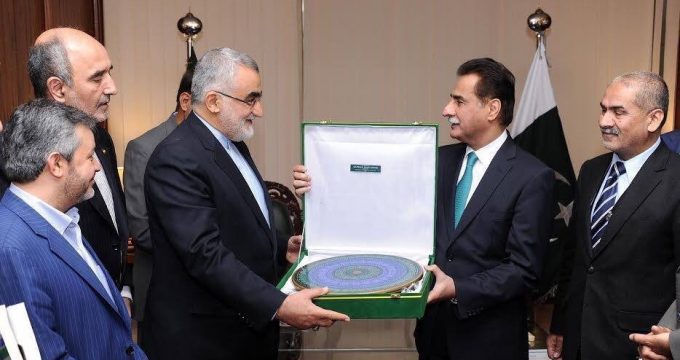 Press tv- The speaker of the lower house of the Pakistani parliament has emphasized the Islamic Republic’s influential role in the Muslim world.

“Not only do we consider Iran to be a brotherly, important neighbor, but also we view it as an influential country in the Muslim world,” said Speaker of the National Assembly of Pakistan Sardar Ayaz Sadiq in Islamabad on Friday.

He was speaking in a meeting with the visiting Iranian parliament member Alaeddin Boroujerdi. Boroujerdi, who is the chairman of the Iranian Parliament’s Committee on National Security and Foreign Policy, arrived in the Pakistani capital on Wednesday on a three-day visit, during which he met with senior Pakistani officials and extended the invitation of Iran’s Parliament Speaker Ali Larijani to some senior Pakistani parliamentary officials to visit Iran.

During their meeting, Ayaz Sadiq and Boroujerdi stressed the need for the preservation of unity across the Islamic world and the thwarting of plots aimed at dividing Muslims.

Boroujerdi also called Pakistan “Iran’s Islamic brother” and appreciated its role in bringing about unity and convergence among Muslim countries.

Also during the trip, the Iranian lawmaker met with Nasser Khan Janjua, who is Pakistani Prime Minister Nawaz Sharif’s national security adviser; Sertaj Aziz, who advises Sharif on foreign affairs; and Chairman of the Senate of Pakistan Reza Rabbani.