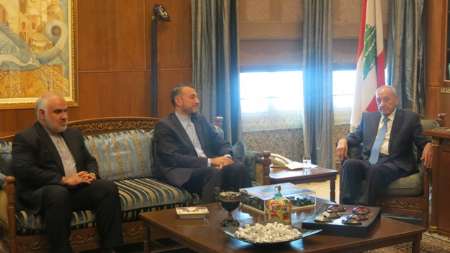 Iran hopes crises to be over focusing on terrorism campaign

IRNA – Special Aide to Majlis Speaker for International Affairs, Hossein Amir-Abdollahian, on Monday expressed hope that all crises in the region could be solved by concentration on stern campaign against terrorism, diplomacy and national dialogues.

Amir-Abdollahian made the remark in an interview with reporters following meeting with Lebanese Parliament Speaker, Nabih Berri, in Beirut and submitting invitation letter of Majlis Speaker, Ali Larijani, to his Lebanese counterpart to attend International Conference on Palestine.

He said considering the need to concentrate on Palestine and Quds, Iran is to hold an international conference in Tehran to support Palestinian oppressed people.

Amir-Abdollahian, who is Secretary General of Palestine International Conference, said the meeting was an opportunity to discuss and exchange views on regional issues, especially on Palestine, Yemen and Syria.

Amir-Abdollahian said he and Berri had discussed and consulted on details of the conference.

‘We believe diplomatic solution is the sole way to settle Syrian crisis, but this issue should not make us neglect helping Syria fight terrorists,’ Amir-Abdollahian said.

Yemen and Bahrain crises also have political solution as well, he added.

He expressed hope that all Arab and Islamic states pay attention to ominous goals of the Zionist regime in the sensitive region of west Asia and necessity to support Palestinian oppressed people.

Special aide to the Majlis speaker, heading a delegation, arrived in Beirut on Monday morning to consult and exchange views with the Lebanese officials on regional and international developments, specially Palestine.