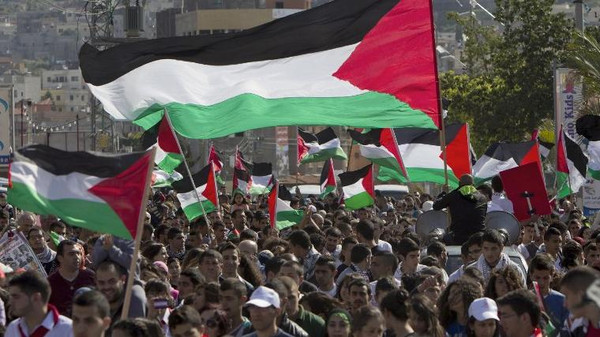 Press TV- Thousands of Palestinians have staged a protest rally in northern Israel to show their anger at Tel Aviv’s killings of Palestinians as well as its home demolition campaign in the Negev desert.

The protesters briefly blocked Highway 65 near the town of Arara in the Wadi Ara region, carrying signs with slogans that called Gilad Erdan, the regime’s public security minister, a criminal.

The demonstrators were angry at the demolitions on Wednesday of a number of homes and structures belonging to Bedouin Palestinians in the Umm al-Hiran, a Bedouin village in the Negev desert. Tel Aviv claims the structures had been built without Israeli permits.

Prior to the demolitions, Israeli forces also shot Yacoub Abu al-Qian, a local math teacher, to death in the area.

Ayman Odeh, head of the Joint List coalition that represents parties led by Palestinian members of the Israeli Knesset, told reporters that the protest was held “to show loyalty to the martyr Abu al-Qian” and condemn Israel’s killings of Palestinians.

Israeli police claim Abu al-Qian, whose home was among those demolished by Israeli forces, had carried out a car-ramming attack against Tel Aviv’s forces.

However, numerous witness accounts and investigations by Israeli media and NGOs suggest that police opened fire on the man while he was driving normally, causing him to lose control of his vehicle and hit several people. An Israeli officer was killed and several others were wounded in the incident.

Israel’s Jerusalem Post quoted Odeh as saying that an investigation should be opened into a decision by authorities in Tel Aviv, including Prime Minister Benjamin Netanyahu, for stopping “negotiations with the people of Umm al-Hiran and for all the events that occurred at the evacuation.”

Odeh called for the immediate return of Abu Qian’s body to his family. Israeli officials have set several preconditions for releasing his body.

“Minister Gilad Erdan, who did not miss one chance to stand before a microphone and lie on Wednesday, while inciting and igniting the flames, should resign immediately,” Odeh said.

Odeh, who was in Umm al-Hiran on the day of the demolitions along with a group of the Joint List members, was shot by Israeli troops in the head with a sponge bullet.

“We know that there are 50,000 houses without licenses as a result of Israel’s planning policies,” he said in the video posted on his Facebook page.

“This means demolitions will not stop, but will rather reach more houses in Israeli villages and cities. For that reason this demonstration, attended by thousands, should be understood as a resonant cry of a people who want to live in their homeland in dignity,” he added.

Reacting to the home demolitions, Arab Higher Monitoring Committee (AHMC), which is an independent political organization coordinating political action among various Palestinian groups in Israel, announced a general strike across Palestinian villages and cities in Israel.

Mohamed Baraka, head of the AHMC, urged the international community to protect Palestinians against what he described as “clear targeting” by the Israeli regime.

In late December, the UN Office for the Coordination of Humanitarian Affairs (OCHA) announced that Israel’s demolition campaign against Palestinian homes and structures across the West Bank and East Jerusalem al-Quds had reached the most unprecedented level in the past seven years.

Israeli demolitions of Palestinian homes and structures have raised alarm among diplomats and human rights groups over what they regard as the Tel Aviv regime’s continued violation of international law.