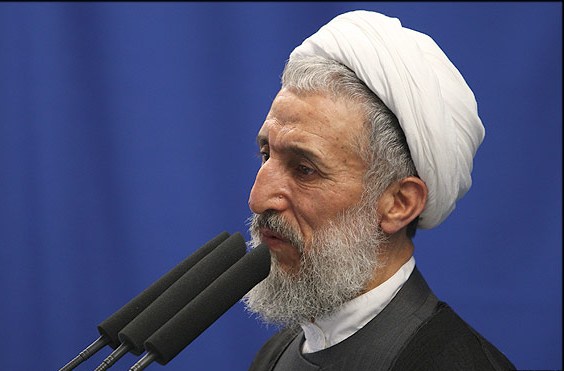 IRNA – The Iran-Russia-Turkey initiation to hold the Astana meeting without US presence is sign of decline of the US power, Tehran Interim Friday Prayers Leader, Kazem Seddiqi, said.

Speaking about Astana meeting for resolution of Syria crisis, Hojjatoleslam Sediqi in his second sermon to this week’s Friday prayers congregational prayers voiced hope that Tehran, Moscow and Ankara who have initiated the Astana talks, will play an effective role in comprehensive ceasefire in Syria.

The cleric also hoped that the Astana talks will help removal of the siege of Syrian regions of al-Foua and Kefraya.

Holding the Astana summit without US presence shows decline of the US power, he added.

Hojjatoleslam Seddiqi, referring to execution of three Bahraini young people and imprisonment and crack down of peaceful demonstrators in Bahrain, said people’s resistance will result in ouster of illegal rulers of the country.

Elsewhere in his remarks, the Hojjatoleslam pointed to the anniversary of the Joint Comprehensive Plan Of Action, reached between Iran and the G5+1(the US, the UK, France, Russia, China plus Germany) and said the US has extended the sanctions and added new embergos in violation of its obligations enshrined in the nuclear deal.

‘Those who were optimistic about the US promises, should know that a year after implementation of the nuclear deal, recession and unemployment are still continuing.’

Talking about fire incident in Tehran Plasco trade center on Thursday, January 19, the cleric said, ‘We should be ready for checking the outside and inside incidents and threats.’

He condoled with the bereaved families of firefighters, who are feared killed in the collapse of the Plasco Trade Center.

The establishment should be prepared for countering threats and incidents inside and outside the country.

Praising the sacrifices of Iranian firefighters, he urged the officials to find preventive measures to deter occurrence of such incidents.

‘We have outside enemies. The Armed and security forces, and the people should observe the internal threats, crises, floods, earthquakes and unexpected events.’

The cleric underlined that the establishment should be always ready and should move and equip itself in all fields.

The Islamic Revolution proposed a new way of governance to the world in an age which the world was divided between the Eastern and Weston blocs.