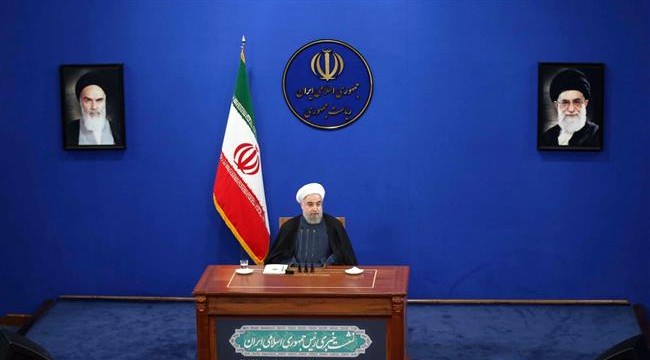 MNA– President Rouhani has told his 9th press conference in Tehran Iran would welcome working with Saudi Arabia to bring about a more stable Middle East.Mr. Rouhani began his address with the death of Ayatollah Hashemi Rafsanjani for the prelude; he urged the system to use his legacy and conduct in political life.

Rouhani believed the nation at large had preferred moderation and a path to rationality to solve country’s pressing issues.

“Let us to attach to moderation. It will help create a moderate situation where ethics are respected and humanity is served well; I personally extend the nation for the trust they invested upon the government. In all fields of economy and politics, the achievements of the government was helped by the nation’s company; in many fields, we had advances, but in others we still have a long way to go,” he told the press conference.

President Rouhani believed the economic growth of 6.4 per cent growth was almost unparalleled in the Middle East and the world where many countries had been hit by economic recession; “I am also indebted to organizaitons elsewhere in the system for their help government to create over 700,000 jobs in recent years; this is a tour de force; however, with unemployment still a large problem, the figure may be dwarfed by the sheer unemployment and the increasing number of university graduates,” he added.
On JCPOA, Rouhani believed it belonged to the nation and their patience and was a national achievement and parties should not be seen as an election season tactical measure; “more than JCPOA, the success of the nation should not be viewed with malignancy; this great nation was a winner in political arena; we told the world that we would not seek nuclear weapons; we belied their claims that their accusations were totally untrue; the same countries would be embarrassed for their views of Iran; the IAEA has admitted that Iran’s nuclear program has not any point of suspicion; the end of the nuclear dossier meant a moral high-ground for our nation,” Rouhani asserted.

“Iranophobia was a misconception; this we told the world; we told the world that Iran was not deserving the designation of a country which is a threat to the world; in UN, we were successful to secure cancellation of the same resolutions which vilified Iran; we now have the approval of the UN and the IAEA for our peaceful nuclear program; this is a great victory in international community; we demanded that sanctions should be removed; we rejected gradual removal,” he said.

“I am telling the nation that all nuclear-related sanctions had been removed in the day of implementation; now our oil and gas, transportation, and insurance do no longer suffer sanctions; in banking however, we face restrictions and know that an enemy state such as the US would sabotage the deal implementation especially banking transactions; we should turn to problems in place which still bites our economy and our nation still expect us to effectively address; on a deal hit with six great powers, naturally we should expect issues; however, we have faced strongly against sabotage, but eschewed overhasty decisions so that our national interests remain secure,” he concluded his address before press questions.

On the question on poverty, underrepresentation, and other social evils and the fact that the critics believed JCPOA had nothing concrete to the downtrodden in social arena, Rouhani believed JCPOA contributed to the general trend of the economy, with little effects on the life of the citizens; “without JCPOA, our oil incomes would have shrunken severely; however, we succeeded to pay the government employees using the income which was direct effect of the JCPOA,” said the president; “the critics made their critiques in abstractions; they should come and provide some enlightenment as to what issues the JCPOA had not been effective,” he proposed.
“Investment is critical to the life of the citizens and the same underrepresented people; we covered them with social security and now they enjoy a safety net; so, we believe that total rejection of the JCPOA by specific circles who target government abusing the deal is inaccuracy and they should not fight the JCPOA since they fight the government,” he told the press conference.

On the impact of the death of Ayatollah Hashemi Rafsanjani and possible speculations that the hardliners would now easily pressure Mr. Rouhani in his policies and that he would be in the last year of his first term, Rouhani rejected the speculations as distantly related to the election and his current position, while he believed Ayatollah Hashemi’s absence would be felt badly; “the national solidarity displayed by the nation in his funeral should be taken for granted,” he said.

On unemployment, Rouhani believed the influx of the university graduates strictly limited the ability of the government to create jobs; “in past governments, oil income was squandered importing foreign goods while the income should have been channeled to domestic economy; we have now fresh graduates per year who seek jobs in par with their academic achievements; within a year, we have 1.2 million young people seeking jobs; government’s capacity to create jobs is limited, so we will have an army of unemployed,” he said, admitting that the number of job-seekers had still been exceeding jobs created.

Rouhani believed without active economic sectors and investment incoming to economy, creating jobs would be an impossibility; “in some sectors fortunately, we have had concrete growth; for the sake of example, I invite critics to view the figures and situation in steel industry where we have taken huge leap forward; overall, in all provinces we detect a sort of economic boom, albeit in a slow pace; the legacy of the past still bestride our efforts to free the economy of the long recessions before 2011; this is true that boom would not be easily seen in all sectors, but government hopes to have this modest growth,” he said.

On Iran’s position and contribution to Astana peace talks of Syria, president said Iran was welcoming the Syrian possible ceasefire with some of opposition groups; “this is a great achievement for Syrian government; we should keep the ceasefire progress ongoing; the past sessions had the pitfall that Syrian government and effective players were absent; now in Astana, we will have the major players, with Russia, Iran and Turkey as organizers of the session, where all believe that all sides will be Syrian; Iran’s good offices seeks to secure an ongoing nature to Astana meeting to address other emergent issues, since Syrian situation is extremely complex and dialogue should address all such issues of Kurds, foreign mercenaries, and political borders; that what sort of government in Syria should rule depends on the Syrian people; we only should help them to come to a decision on their political future,” Rouhani said.

On the hot issue of relations with Saudi Arabia and the tense situation with political relations severed following events of 2015, Rouhani responded that Iran’s official line of policy sought a direct cordial relations with all neighbors, especially Persian Gulf Arab states, with whom Iran had good relations in the past; “Saudi Arabia was an aggressor in the case of Yemen; in Bahrain and elsewhere in the Middle East, they actively intervene; we would object to the kingdom’s policies; however, we had had diplomatic contacts especially after execution of Sheikh Nimr Baqir al-Nimr and embassy incident; now, Iraq and others had acted as mediators to bring Iran-Saudi relations to a terra firma; Iran do not want to change the regime in Saudi Arabia, nor we want to intervene in their internal affairs; however, terrorism has been nourished by the kingdom and the real issue remains with them to rectify their misguided policies; we hope to cooperate with Saudis in bringing order and stability to the region,” he asserted.

Rouhani believed JCPOA had created grounds conducive to Resistance Economy the government had been assigned by the Leader to work on; “the first step in which we succeeded was to improve oil production with spikes hit easily; we believe the oil industry had been on a good job; in petrochemical sector, we have had opened many refineries and this had created jobs as well; in other sectors as well, we have witnessed a revolution in agriculture where production prediction had been realized; in industry, we have the same leap forward where foreign companies  work with native automakers; in air industry, we also succeeded in contributing to tourism industry indirectly,” he rejoiced to say.

On a question of sanctions which had been in place, Rouhani believed that the JCPOA only hit sanctions related to Iran’s nuclear program; “in those areas related to our nuclear program, we enjoy modest openings in economy; in medicine, in transportations, and other sectors, we now suffer no sanctions; these all would have impact on daily life of the nation indirectly but the effect is considerable when seeing the situation from a broader vista; however, sanctions not related to the JCPOA still are in effect; we believe ISA was a violation of the JCPOA and we immediately reacted, asserting pressure through diplomatic corridors on the US; they said the ISA will not extend effect on Iran’s economy, lest it would violate the JCPOA. We expect other sabotage by the US naturally, but we have mechanisms to vindicate as well; our own commitment implementation had only ended few years ago; we see the future promising and we should not fear the consternation of specific parties who reject the fact of success of the JCPOA. The president-elect Trump will also face the deal with many possibilities, to which we will be prepared,” Rouhani emphasized.

“Mr. Trump had only expressed his opinion on the JCPOA that it was a bad deal; however, it is a propaganda meant to affect the populace in election season; we believe renegotiation of the deal was impossible by our standards; for us, it is a finished deal with the UN having officially endorsed the deal; so, we see the prospects of renegotiation is grim and that either renegotiated or not, it will not have any impact on Iran’s future policies on the deal,” Rouhani added.

“Hi-tech companies had been new measure to link universities with industry; they have also contributed to the economy as well; we will continue to work with the international community to secure the pace of progress in industry,” Rouhani told the press conference.

Rouhani believed that on Syrian crisis, Astana initiative had been successful since it secured an opposition participation; however, major players such as Saudi Arabia was just onlookers; “we believe that ceasefire and negotiations should continue and fight against terrorism should continue; this is a real issue where Syria should ultimately attain stability and peace,” he concluded the press conference.