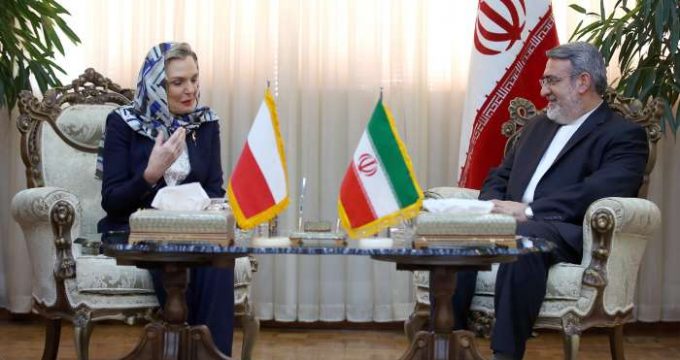 IRNA – Interior Minister, Abdolreza Rahmani Fazli, says acts of terror earlier occurred in certain Asian states but the evil phenomenon has spread to all countries, including the European states.

In a meeting with the visiting Secretary of State in the government of Poland’s Prime Minister, Anna Maria Anders, on Sunday, Rahmani Fazli said all the countries should strive for elimination of the threat of terrorism.

Referring to good relations between Iran and Poland, the minister said the relations have in all areas been ever increasing which will hopefully be further strengthened.

Rahmani Fazli pointed to commercial cooperation between Iran and Poland, saying that bilateral trade and cooperation will further improve following the establishment of lines of communication.

Noting Iran’s export of oil to Poland following implementation of the Joint Comprehensive Plan of Action (JCPOA), the minister said efforts should be made to further bolster commercial exchanges.

Iran is ready for setting up specialized anti-terrorism committees, human and narcotics trafficking, he said, describing terrorism as a ‘big problem.’

Expressing concern over spread of terrorism to all countries, he added that all-out cooperation is needed for establishing peace and security in all states, especially in Iraq and Syria.

As to the link between terrorism and drug smuggling, he said, ‘Currently, terrorism secures major portion of its sources out of drug trafficking.’

The Polish official, for his part, expressed pleasure over her visit to Tehran and condoled his host on the demise of Ayatollah Akbar Hashemi Rafsanjani.

She hoped that the Iran-Poland economic ties would further improve.