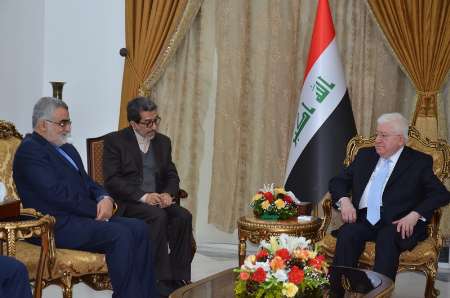 Following his meeting with the President of Iraq, Boroujerdi told reporters that the meeting focused on development of bilateral relations.
The Iranian MP is in Iraq to attend the two-day ‘Baghdad Dialogue Conference and Future of Iraq after Daesh.’

He said that he appreciated Iraqi parliament’s move in holding the conference which was held on Saturday and Sunday.

The senior Iranian MP pointed to special relations between Iran and Iraq, saying that both sides underscored continuation of ongoing dialogue and consultations between the two countries.

While in Baghdad, Boroujerdi has so far met with Iraqi Parliament Speaker Salim al-Jabouri, Foreign Minister Ibrahim al-Jaafari, the leader of the National Iraqi Alliance (INA), Ammar Hakim and a numver of prominent Iraqi figures.