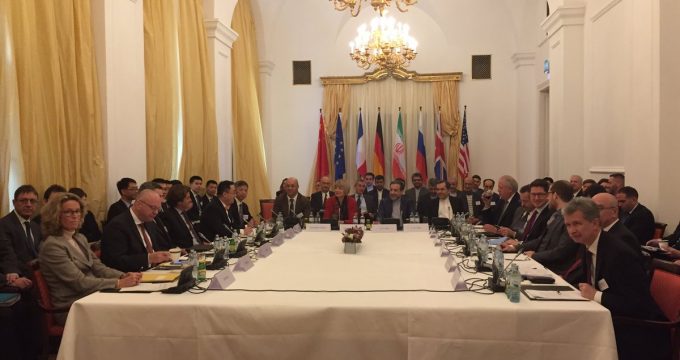 MNA– Deputy foreign minister, while rejecting claims made by Wall Street Journal (WSJ), said the 6th Commission Meeting on JCPOA had approved of Iran’s plan to clean up sediments in Natanz enrichment facility.

Iran’s deputy foreign minister, who headed the iranian party in Vienna session, rejected the claims made by Wall Street Journal (WSJ) and said the meeting had agreed to Iran’s proposal to clean up sediments of Natanz enrichment facility.

“Under the plan, all deposits of enriched materials will be removed from pipes enabling Iran to enrich larger volumes of materials,” said Araghchi among the reporters after the meeting.

WSJ previously claimed that Iran had agreed to lower its uranium reserves to less than 300 kilograms and remove all remaining uranium from Natanz site.

Araghchi highlighted that the approval of the Joint Commission, which was reached after month of negotiations by expert from Atomic Energy Organization of Iran (AEOI), will be published on official website of Iran’s Ministry of Foreign Affairs after being translated.

The Commission convened at experts’ level with representatives of Iran’s negotiating team and the 5+1 group in attendance. A working group on sanctions and separate sessions were also held between Iranian negotiators and those of America, Russia and China.

Experts from Iran and US held a meeting on Monday with Esmaiel Baghaie, Director of JCPOA Follow-up Committee in the Ministry of Foreign Affairs, heading the Iranian delegation of experts the event.

Following the session, a bilateral meeting was held between the Iranian delegation, which was headed by Iranian Deputy Foreign Minister for Legal and International Affairs Seyed Abbas Araghchi, and the American side in Palais Coburg hotel of Vienna.

It marked the second time since implementation of the Joint Comprehensive Plan of Action (JCPOA) that the Joint Commission held a meeting at the request of Iran to deal with America’s breach of obligations and its lack of commitment to terms of JCPOA. Also on Monday, for the first time, a meeting of the working group for implementing removal of sanctions was held with expert delegations in attendance in Vienna.

In the Joint Commission meeting, in addition to presenting a reports by the experts working group, Iranian representatives expounded on America’s breach of commitments over the past year and offered legal documents which revealed that extension of American anti-Iranian sanctions was contrary to JCPOA provisions.

Later, the American delegation reemphasized its full commitment to the Nuclear Deal and, while recalling that US president had refused to sign the Act as a major political decision and enumerating a number of legal and operational measures which had been taken to nullify ISA, stated that “the law has had no practical effect and mere extension of the Act in the Congress would not interfere with America’s obligations to JCPOA.”

Representatives of other countries, later into the meeting, deemed Iran’s concerns as serious and called on the US to render ISA ineffective by alleviating all doubts to any possible impact of the Act on trade or cooperation with Iran.

Afterwards, all present countries emphasized their complete commitment to JCPOA and stressed the need for avoiding actions which could undermine effective implementation of all or parts of the international deal. They also underlined the need to nullify all legislations similar to ISA which could hinder the Joint Comprehensive Plan of Action.

On the verge of the first anniversary of JCPOA implementation, the meeting took the opportunity to review the status of other sections of JCPOA including peaceful nuclear cooperation with Iran as well as venues for promotions of relevant collaborations.

Iran’s Araghchi, prior to the Commission meeting, stated that Iran deemed ISA as violation of JCPOA and urged US to take necessary measures to make up for the issue.