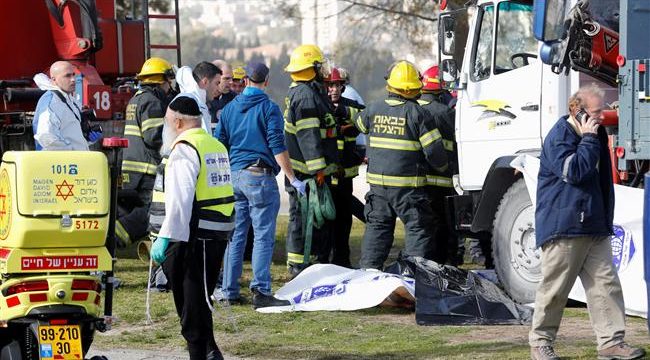 Press TV- The Israeli regime says the body of a Palestinian man who was shot dead following a truck attack in East Jerusalem al-Quds will not be delivered to his family, calling for harsh measures in dealing with his supporters and relatives.

“His body will be buried but only by the security forces and in a place to which the family and his supporters will not have access,” Gilad Erdan, the Israeli public security minister said.

At least four Israeli soldiers were killed and more than a dozen others injured when a truck rammed into a group of military forces in the occupied East Jerusalem al-Quds on Sunday.

Israeli media outlets later reported that the driver of the truck had been shot dead.

Also on Sunday, the Israeli cabinet, headed by Prime Minister Benjamin Netanyahu, decided to destroy the house of the truck driver, identified by Palestinian sources as Fadi Qanbar – a former prisoner in an Israeli jail and a resident of the Old City of Jerusalem al-Quds.

The Israeli cabinet said it has approved administrative detentions for those who have expressed sympathy with the Palestinian man and all individuals who seek to carry out similar moves.

Netanyahu claimed that the 28-year-old Qanbar was a supporter of the Daesh terrorist group.

On Monday, Israeli police said nine people had been detained in connection with the truck attack, including five of Qanbar’s relatives.

Israeli forces also blocked the entrances of the Jabel Mukaber neighborhood in East Jerusalem al-Quds, where Qanbar lived, checking all the cars leaving the area.

The truck attack is the latest in a string of tensions between Palestinian protesters and Israeli forces in the occupied West Bank, which have left over 270 Palestinians dead since October 2015.

The tensions first erupted in August of the same year, when Israel imposed restrictions on the entry of Palestinian worshipers into the al-Aqsa Mosque compound in East Jerusalem al-Quds.

Palestinians view the ongoing wave of protests as the third Intifada against the regime’s occupation.

Reacting to the truck incident, the Gaza-based Palestinian resistance movement, Hamas, said it was a “natural response to the crimes of the Israeli occupation and its violations at the expense of our people, land and holy sites.”

The statement added that this operation is an affirmation that the resistance and the Jerusalem Intifada are ongoing and that all attempts to kill, criminalize and terrorize the Palestinian people will not break the will of the resistance.

The Islamic Jihad Movement in Palestine also termed the incident as a natural reaction to the ongoing Israeli aggression and its violent treatment of Palestinians.