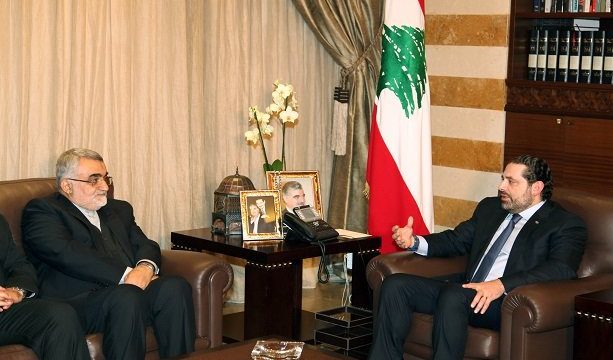 He maintained that the two sides conferred on expanding bilateral relations, regional security and developments in Syria; “Iran and Lebanon share the view that the only approach to end Syrian crisis is adopting a political solution,” he added.

Boroujerdi further noted the ample capacities and opportunities for boosting cooperation between both countries, adding “Iran and Lebanon need to be more active in the fields of trade and economy, especially now that the Lebanese Prime Minister is putting so much emphasis on further cooperation between the two countries’ private sectors.”

During the meeting with the Iranian delegation, Prime Minister Hariri stressed that relations between the two countries need to exceed the current level, calling for further political, trade and cultural ties with Iran as a “major and powerful country in the region with ample capacities and resources”.

“We need to put aside our differences and focus on mutual interests instead,” he said, adding “cooperation among Muslim countries can promote the Islamic world to a major economic bloc.”

The Iranian delegation headed by Boroujerdi arrived in Lebanon on Thursday afternoon after a two-day visit to the Syrian capital Damascus. Boroujerdi also held talks with Lebanon’s newly-elected president Michel Aoun, where the two sides discussed region’s most important issues, particularly in regard to Syria and Lebanon.