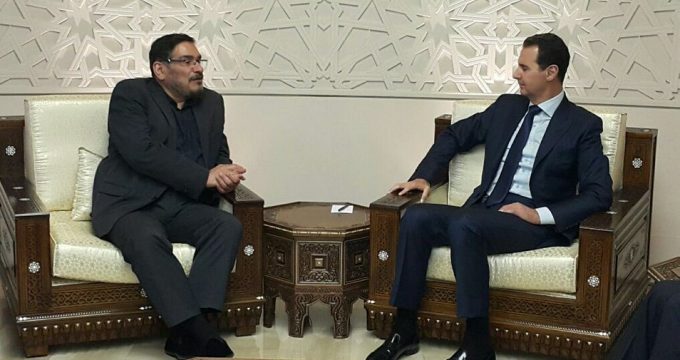 IRNA – Secretary of Supreme National Security Council (SNSC) Ali Shamkhani said on Sunday that the Tehran-Damascus-Moscow cooperation managed to provide the anti-terrorism alliance with the initiative of action, while gaining valuable success in the field.

Shamkhani made the remark in a meeting with Syrian President Bashar Assad.

He said, ‘Close cooperation among Tehran, Damascus and Moscow along with the camp of resistance could bring about valuable field success, thus putting the initiative of political action at the disposal of the anti-terrorism alliance.’

While congratulating Syrian government and people on consecutive victories in campaign against Takfiri terrorism, Shamkhani lauded the influential and leading role of Assad in guiding popular line of resistance and gaining the said success.

While referring to growing diplomatic and security complexities in Syrian crisis and the influential role of various players in the scene, Shamkhani warned against certain suspicious measures which seek pretext to violate ceasefire and bring diplomatic efforts into deadlock.

Shamkhani underlined the Islamic Republic’s decision to help diplomatic process to end war and bloodshed in Syria and said alliance of the armed groups with diplomatic process serves as an important index to assess the degree of belief of their allied states for dialogue and talks.

‘If the armed groups feel that their supporting countries are not serious in the diplomatic talks, they will not definitely return from the course of war and bloodshed. Political talks should be held by Syrians and on their management and the UN and influential countries in the scene should only assume the facilitating role.’

Shamkhani added, ‘All should try that diplomatic talks are transferred to Damascus, as the capital of united and integrated Syria.’

While defining the role of key players in Syrian crisis, Shamkhani said certain countries, being well aware of the necessity of changing unconstructive strategies in Syria, have chosen new ways and managed to make up their past mistakes to some extent.

Shamkhani noted that the countries that are not courageous enough to acknowledge to their mistakes in Syria and insist continuing their wrong conducts, will definitely face irreparable problems and damage.

He underlined the need to activated international capacity to promote shipment of aid to the Syrian people and contribute to reconstruction of vital infrastructures of the country and said, ‘Easing sufferings and calamities of the oppressed people of Syria needs all-out efforts and global endeavor.’
Shamkhani is to meet with other Syrian officials, including Head of Syrian National Security Bureau Major General Ali Mamlouk and talk with him on important regional issues, bilateral relations, Syrian developments and latest condition of campaign against terrorism.

Upon arrival in Damascus, Shamkhani called liberation of Aleppo as a turning point in the incidents imposed on the Syrian people and said, ‘Resistance of the people of the country showed that terrorist levers and injection of instability could not be triumphant in the face of resistance of a nation.’
He said presence to congratulate Syrian officials and people on victory of Aleppo was among other goals of his visit to Syria.