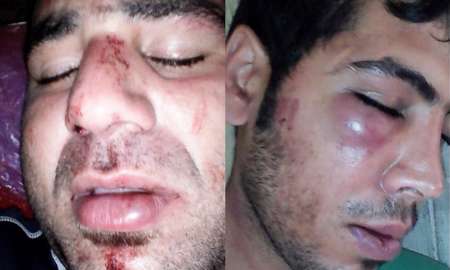 ‘The Refugee Action Coalition said the two Iranians suffered several broken bones in the incident, and photos supplied by the group also showed the pair with cuts and bruises on their faces,’ Australian ABC Channel reported on Monday.

This is not the first time that the Iranian nationals have been mistreated in Australian refugee camps.

Based on statistics, about 450 Iranian asylum seekers are in Manus Island detention centre whose requests have been declined.

‘We don’t like some aspects of the way Australia treats Iranians who have been basically lied to by human smugglers who come to Australia,’ he said.

Zarif said while any Iranian who opted to come home would have their safety guaranteed ‘without question’, his government would never accept the forced return of its citizens.

‘We did not send these people out. These people were lured by human traffickers and by basically propaganda coming from, I don’t know, governmental sources or others, which said they’ll be welcoming those who claim to be victims of what you describe as violations of human rights, so – and they did come. They’re not victims of violations of human rights.’