A Look at Iranian Newspaper Front Pages on December 29

Iran Front Page- Newspapers on Thursday highlighted the remarks made by various Iranian officials about the pro-Establishment demonstrations of December 30, 2009.

The reactions to a recent report by Shahrvand newspaper about dozens of homeless people who sleep inside graves in a cemetery near Tehran also received great coverage.

Papers also widely covered the death of Donya Fannizadeh, the master of popular Iranian puppet character Kolah Ghermezi [the One with the Red Hat], who passed away at the age of 49 because of hand cancer.

2- 75 Years after Japan’s Attack: US and Japan Looking for Sustainable Peace in Pearl Harbour

3- Ahmadinejad’s Heritage for Rouhani: A Hole Which Can’t Be Filled 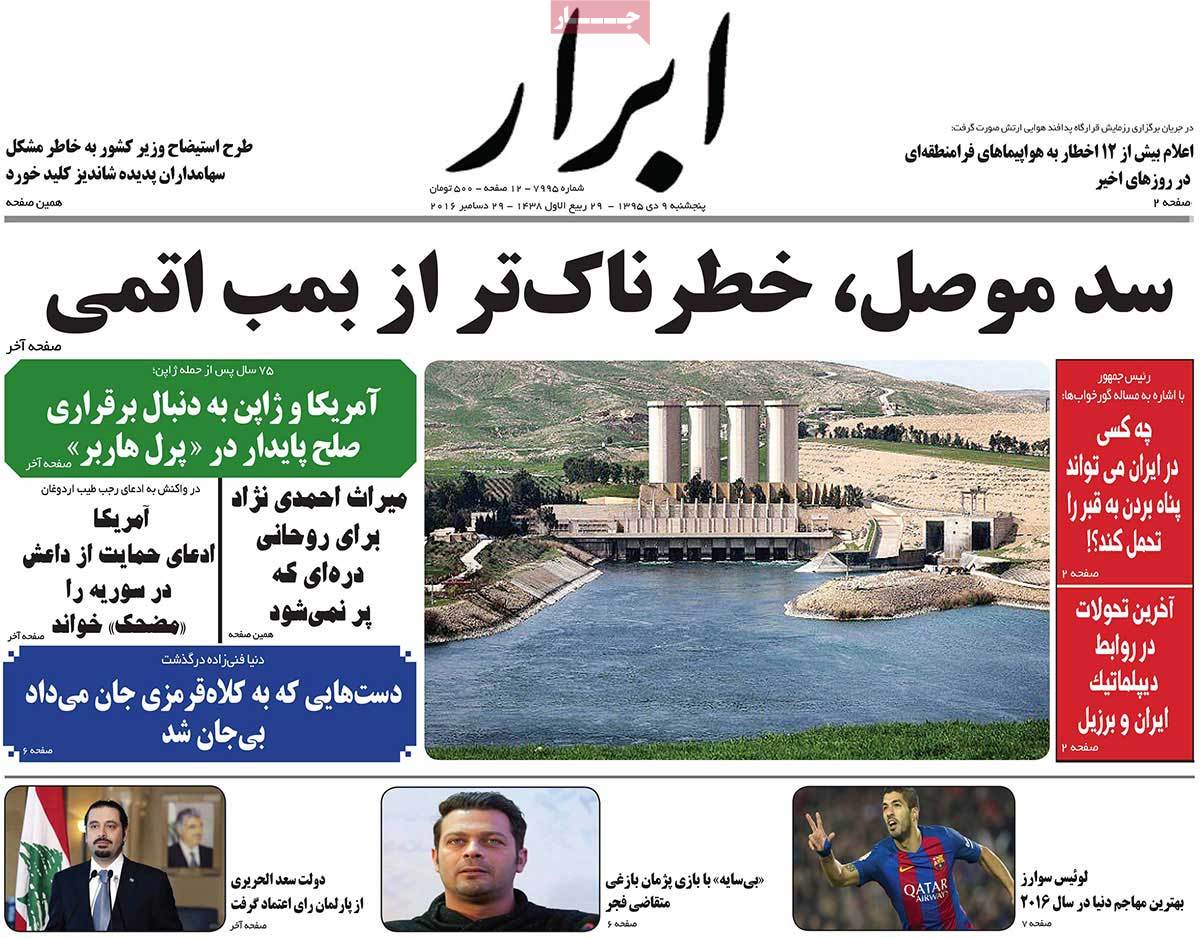 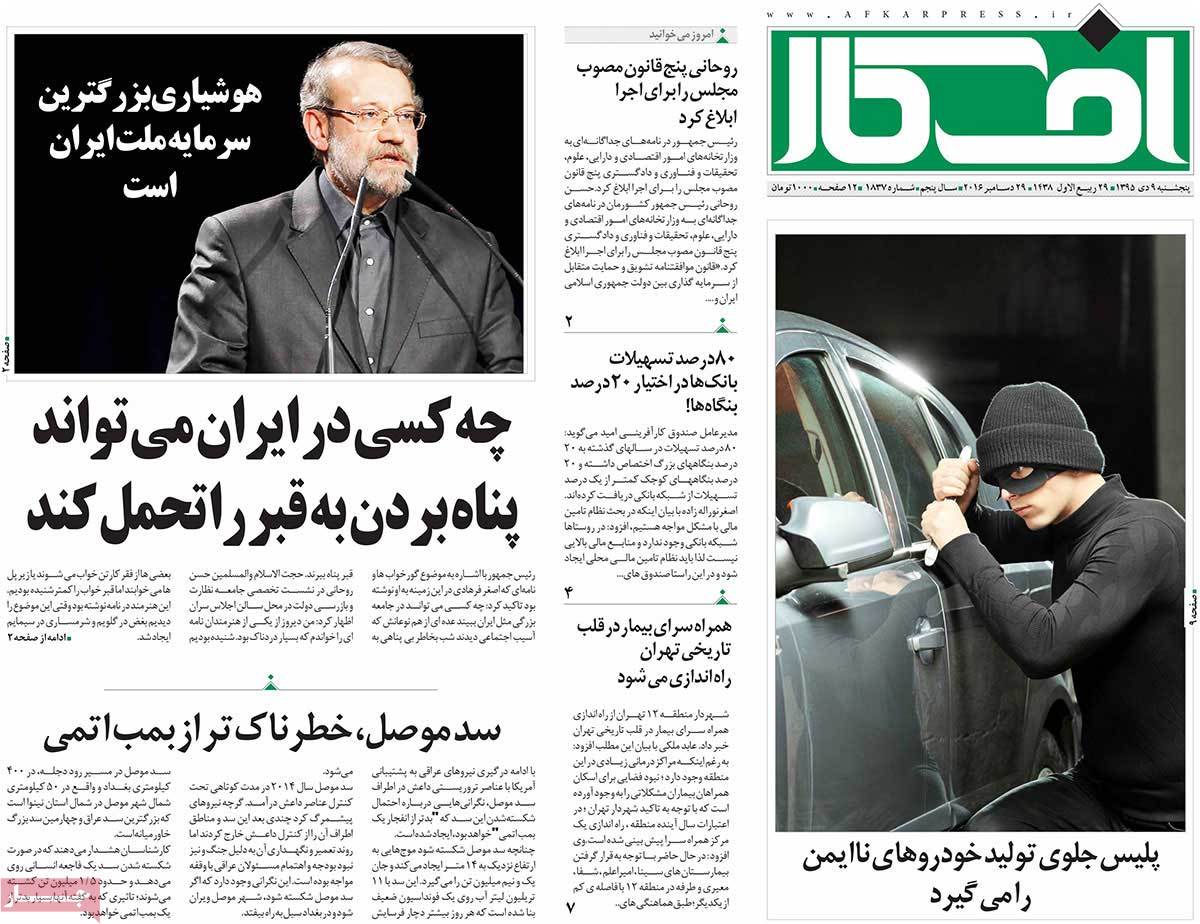 1- Going towards Failure? How Much Chance Does Qalibaf, the Mayor of Tehran and Possible Conservative Candidate, Have to Win Presidency? 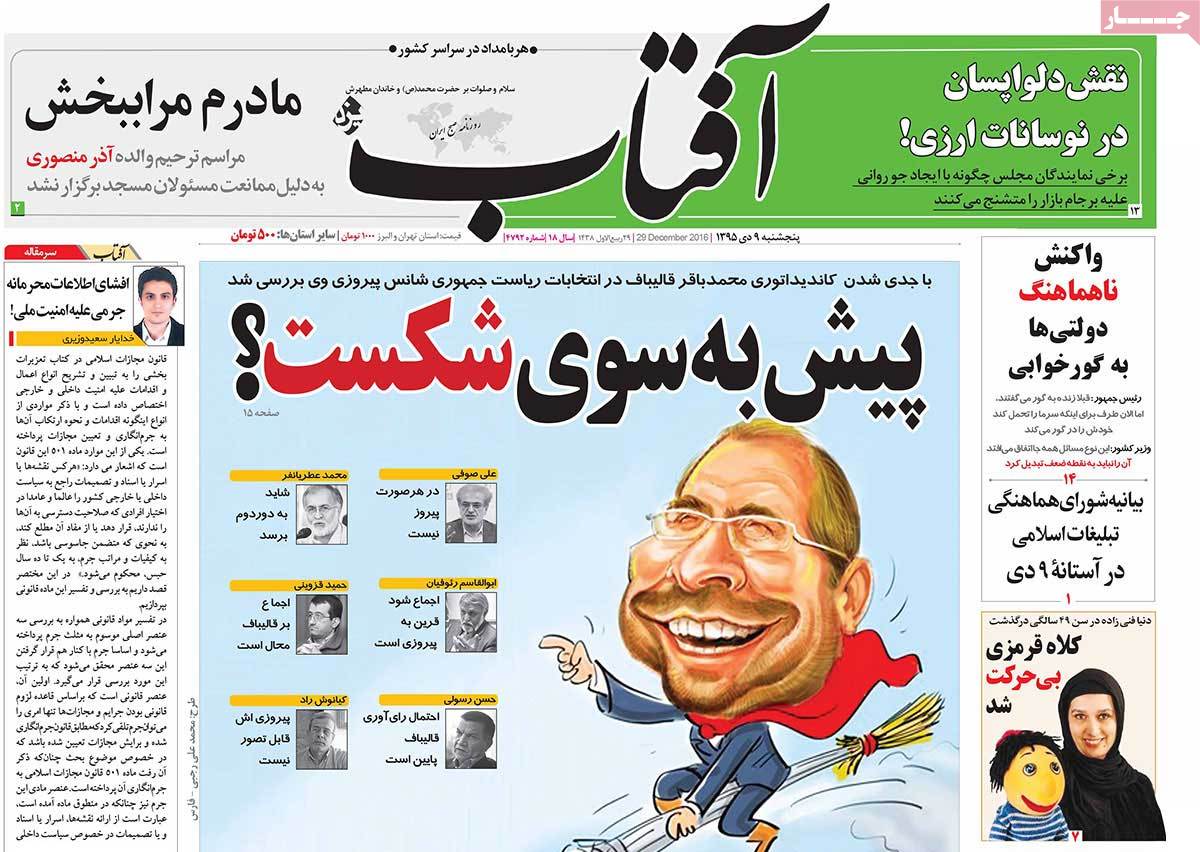 1- The World Is Thirsty for Cooperation with and Making Investment in Iran: Rafsanjani

2- Kolah Ghermezi and the End of ‘Donya’

3- People Like Asghar Farhadi Should Roll Up Sleeves: A Look at Celebrities’ Moves to Resolve Social Harms

4- President Rouhani: Who in Iran Can Tolerate Taking Shelter in a Grave? 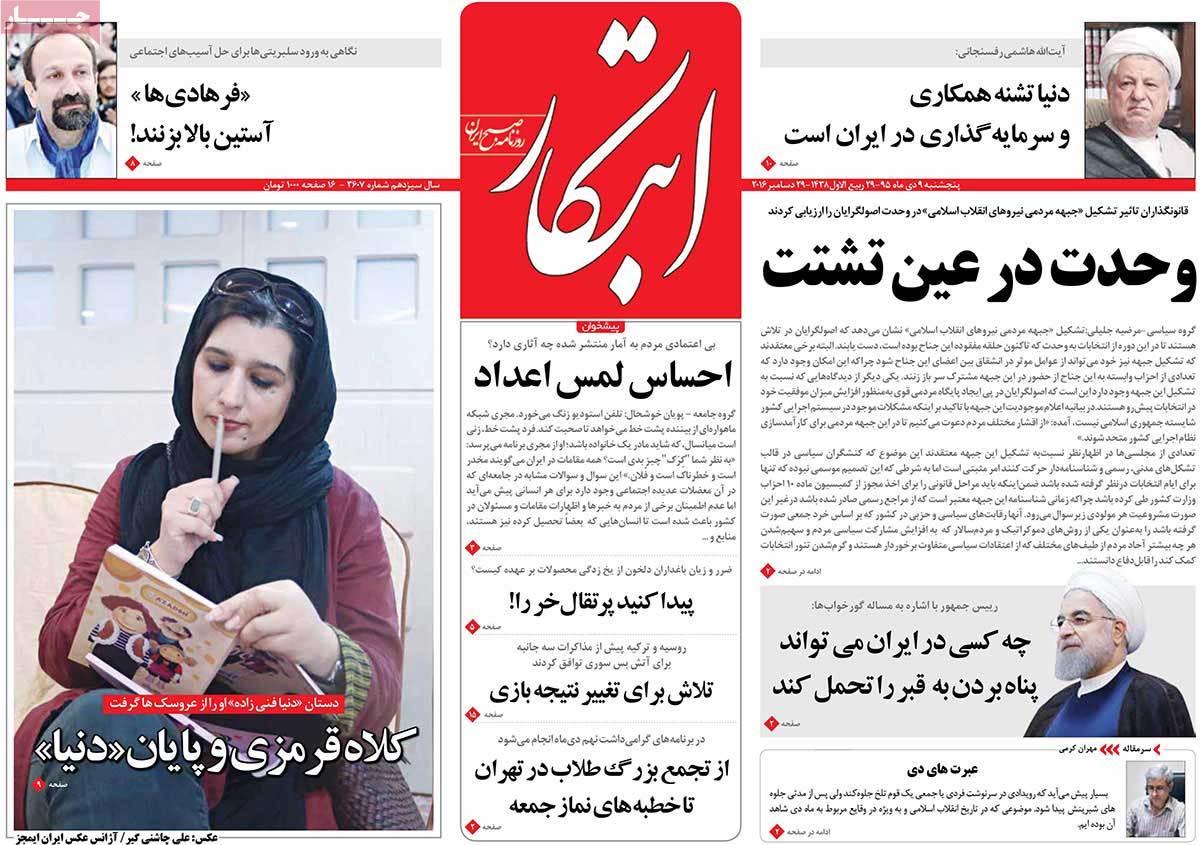 1- Sleeping in Graves Turned to a Political Issue

2- Trump Threatens in Twitter: Horrible Iran Deal Was End of Friendship with Israel

4- Sleeping in Graves Is Not Tolerable, We Are All Responsible: Rouhani 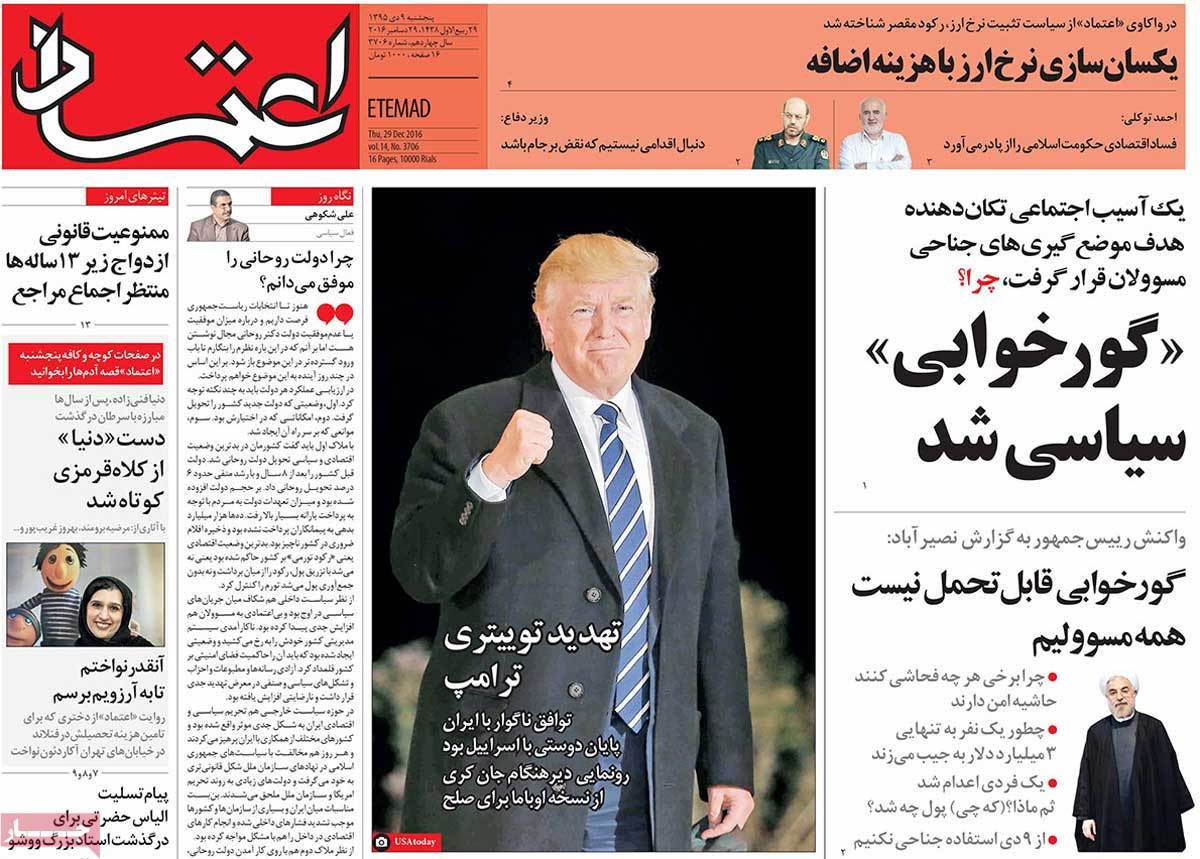 1- Fight against Corruption without Any Discrimination Is a Prerequisite for Improving Economy and Ethics: President

4- Police Commander: Portal to Be Launched for Stolen Properties 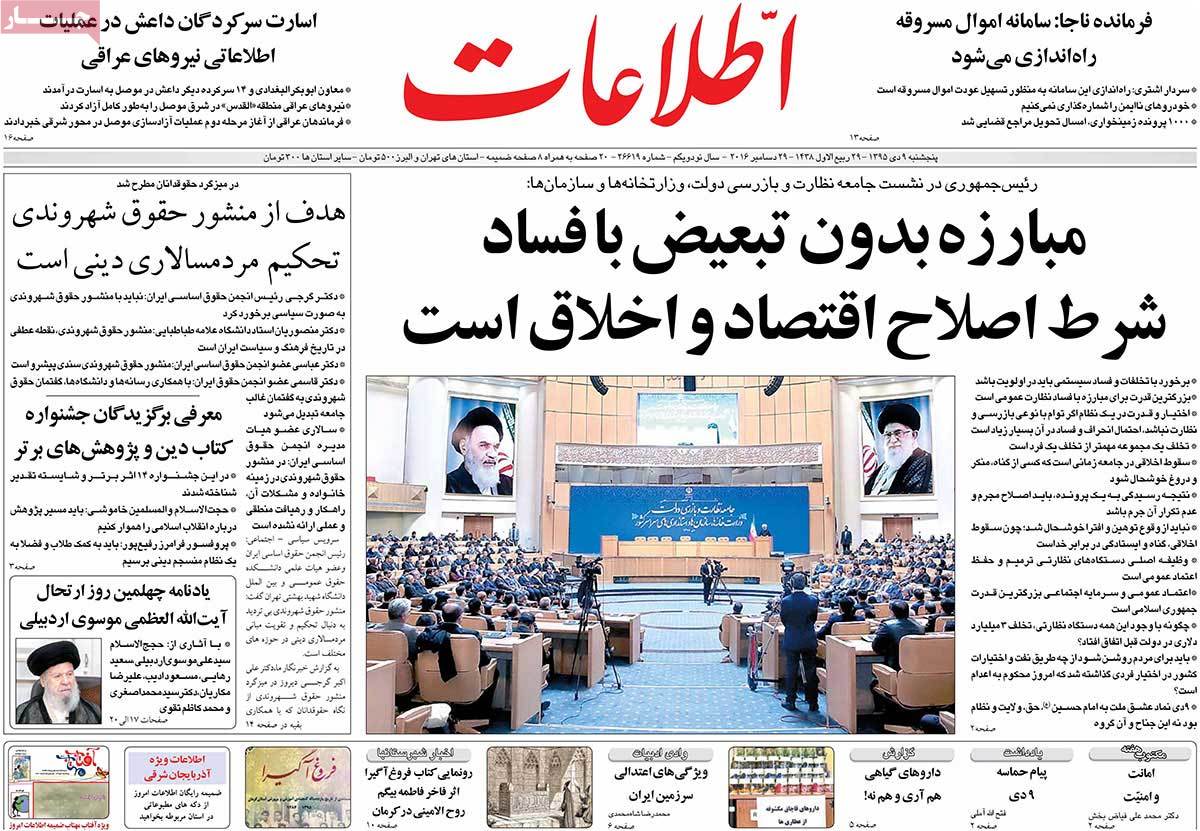 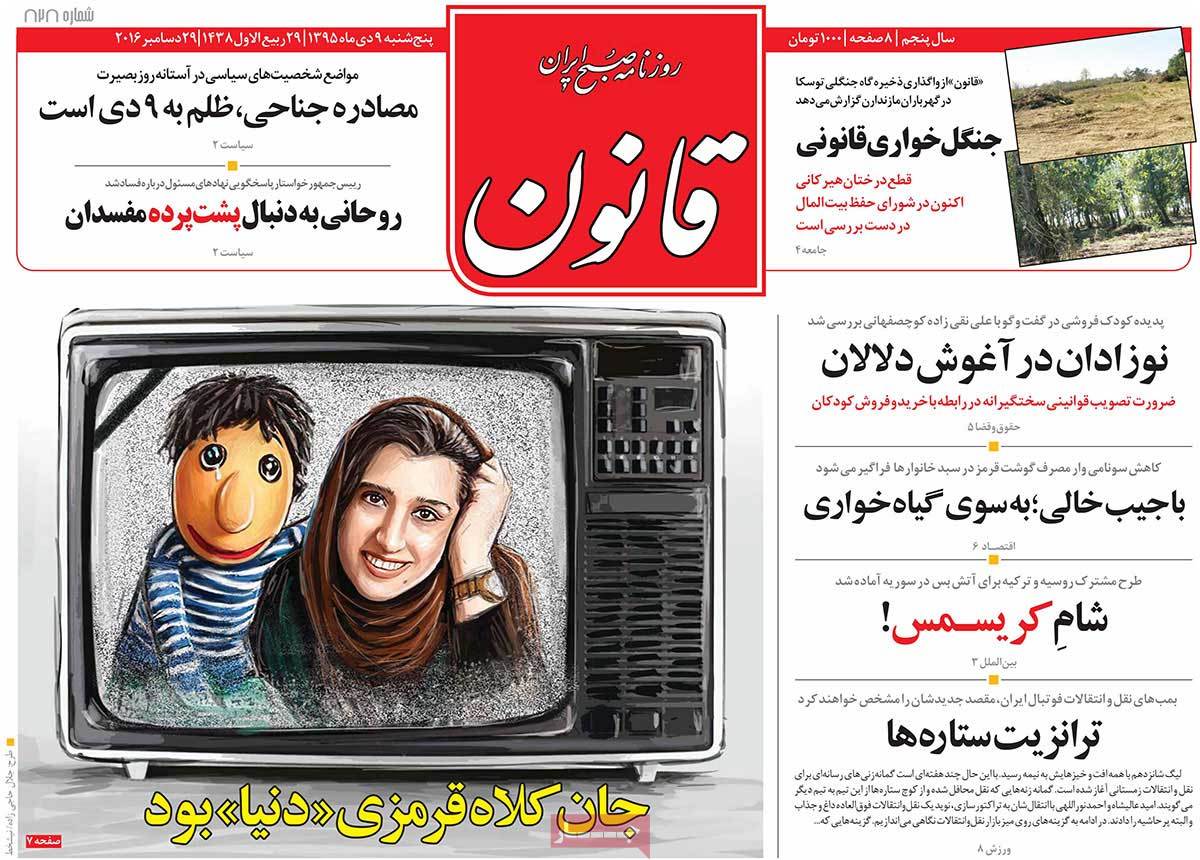 2- Mashhad, the Political Capital of Conservatives 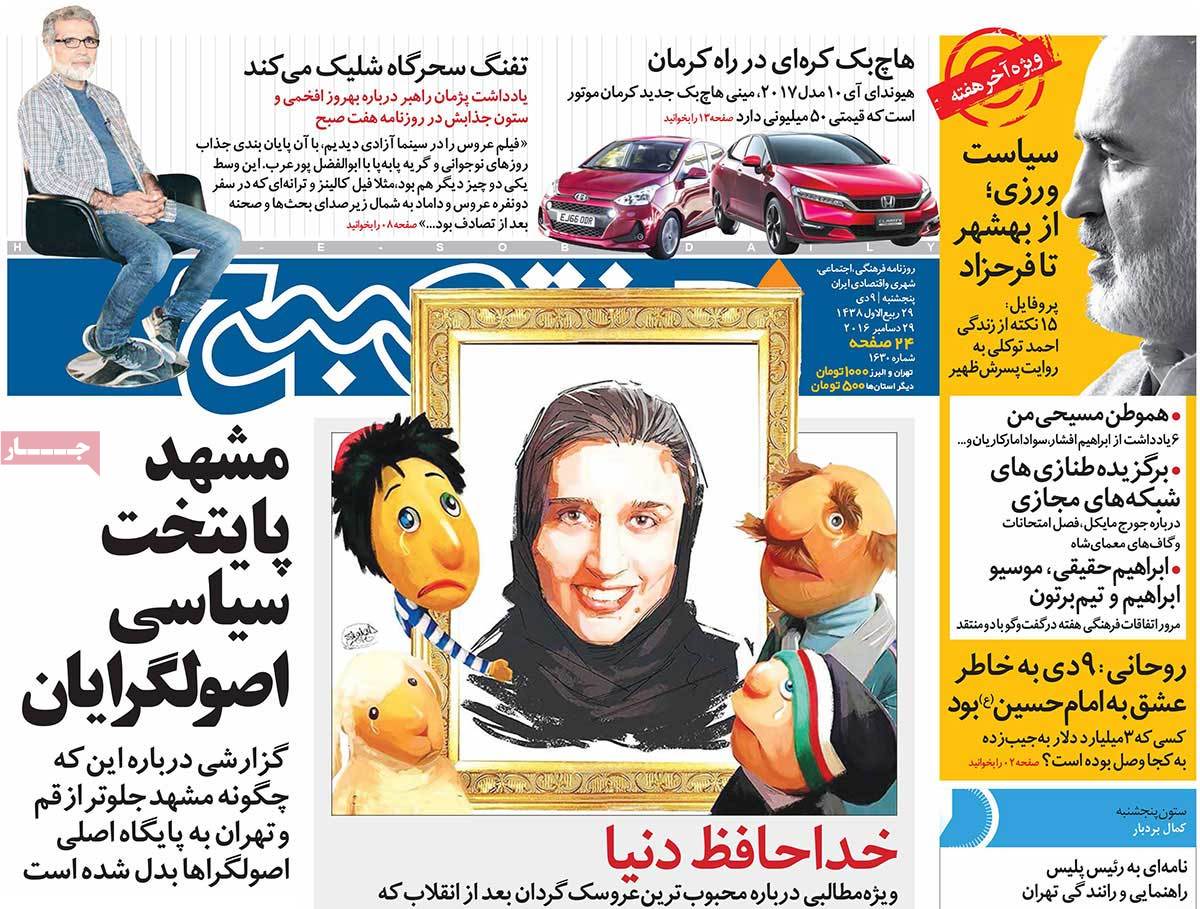 2- Deputy Head of Judiciary: We Are Not Opposed to Amending Law of Fight against Illicit Drugs 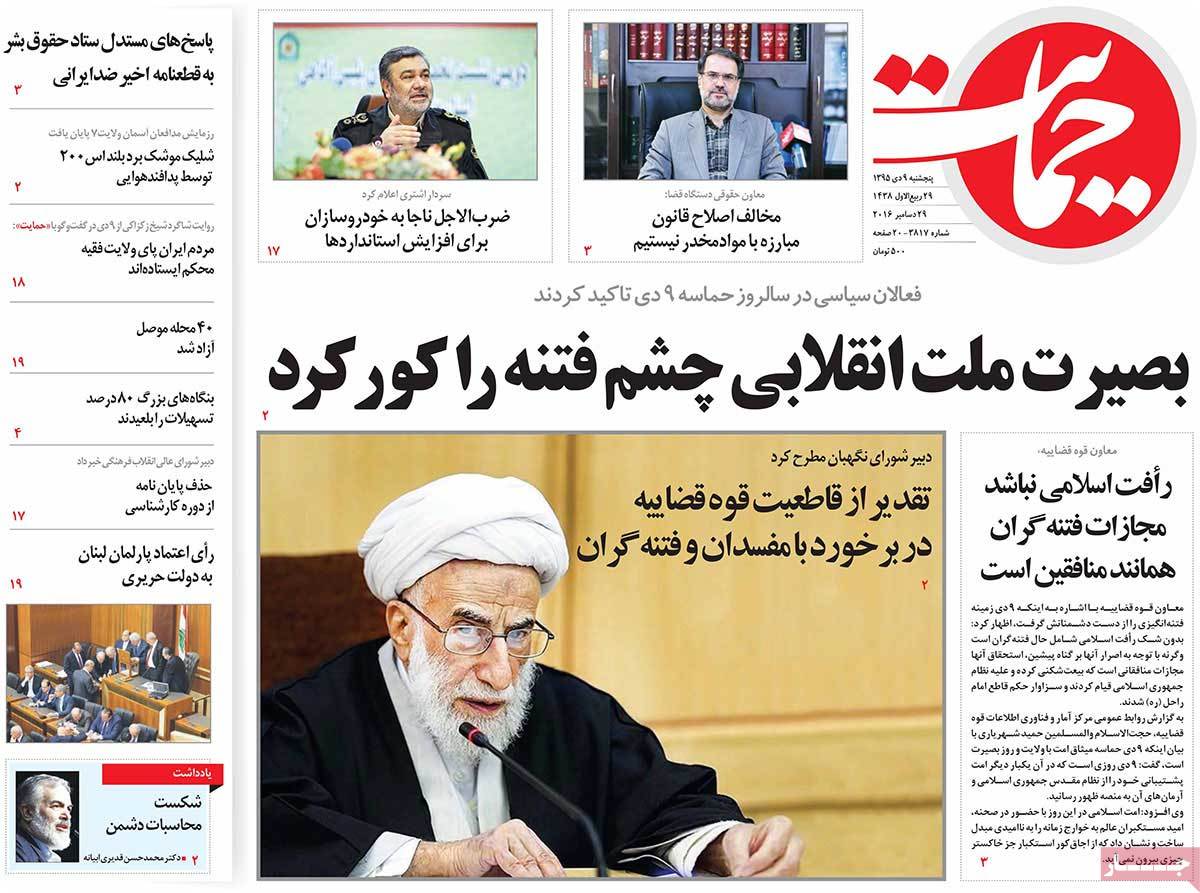 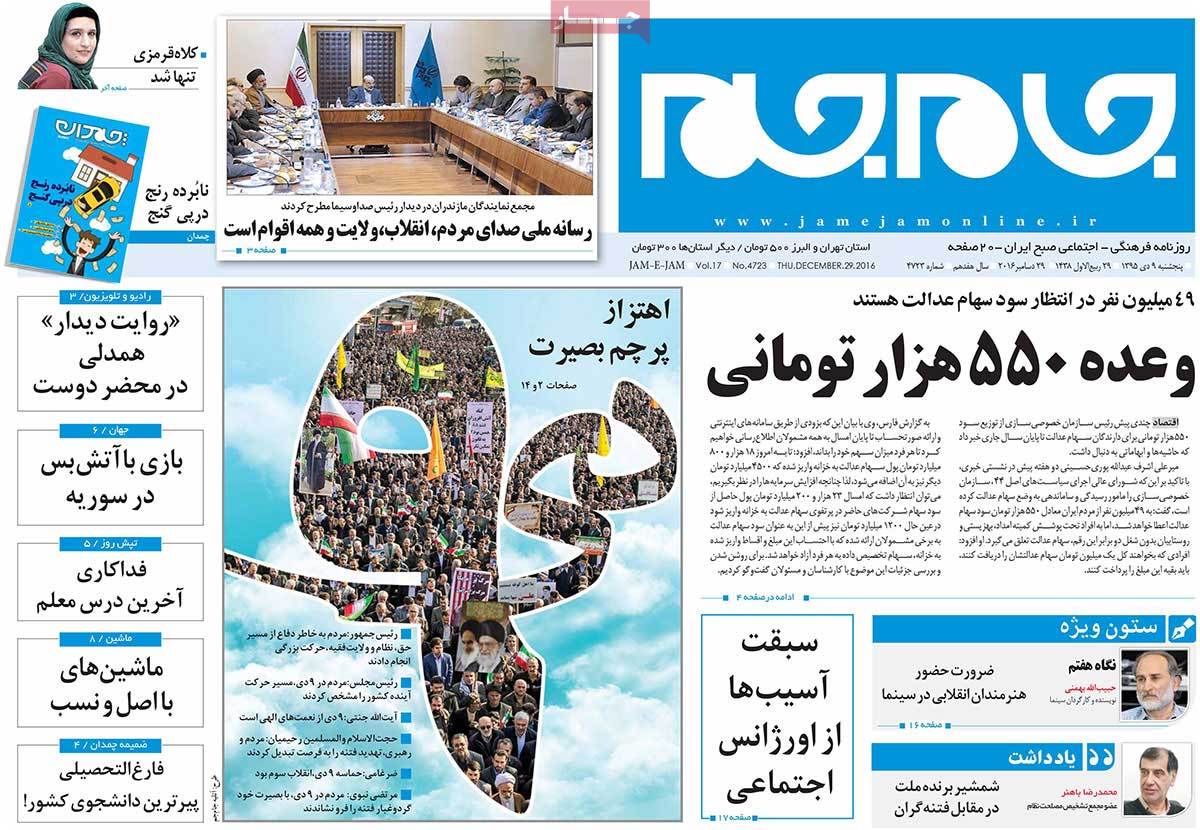 1- President Rouhani: People’s Move on December 30 Was Aimed at Defending the Right Path 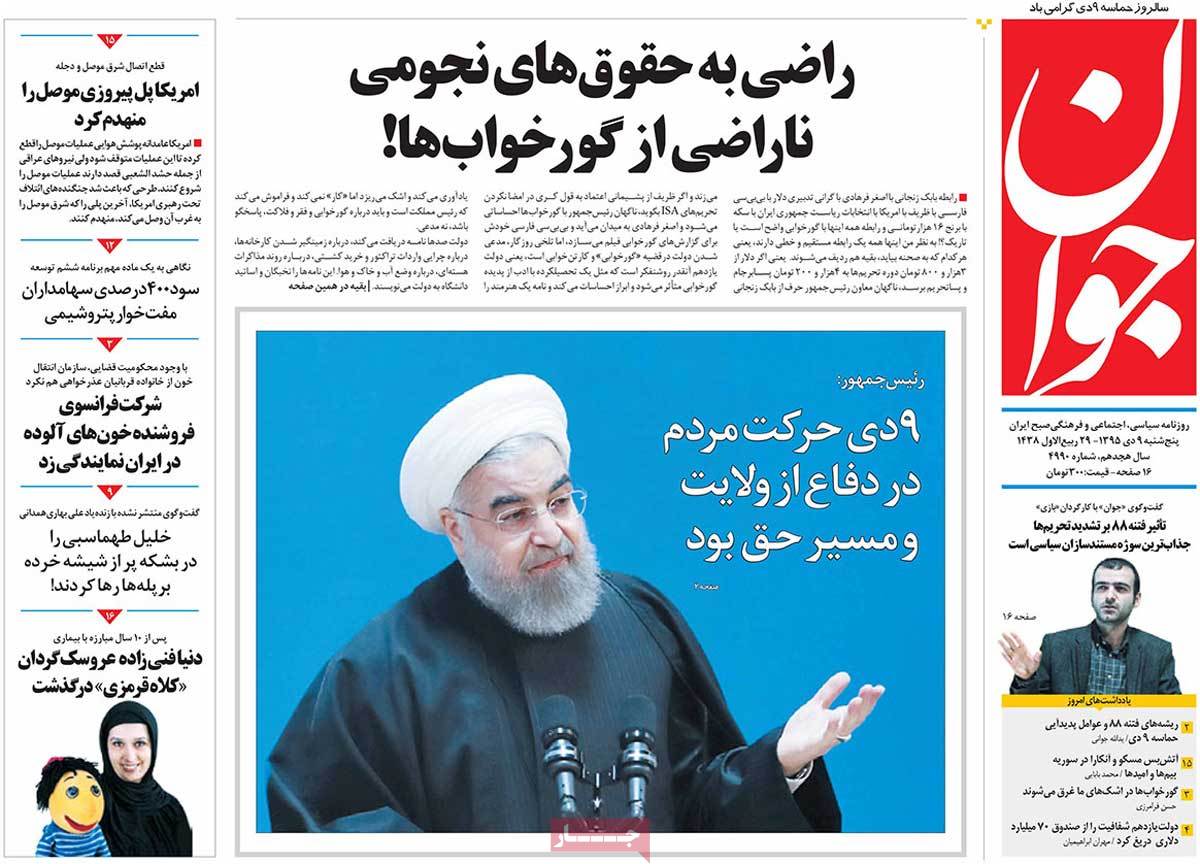 1- People’s Questions about Public Funds Wasted [by Previous Gov’t] Should Be Answered: Rouhani

3- Iraqi PM in Reaction to Riyadh: Popular Forces Units Are a Legal Organization 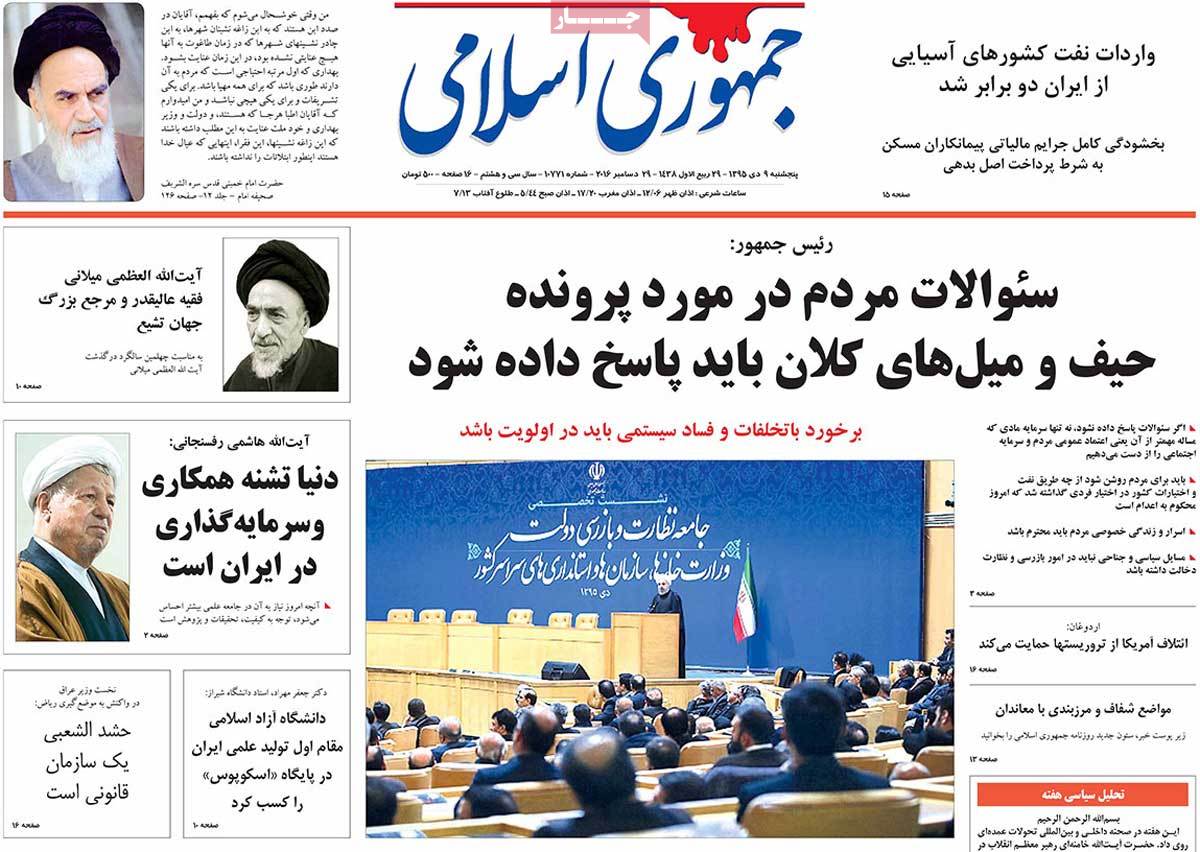 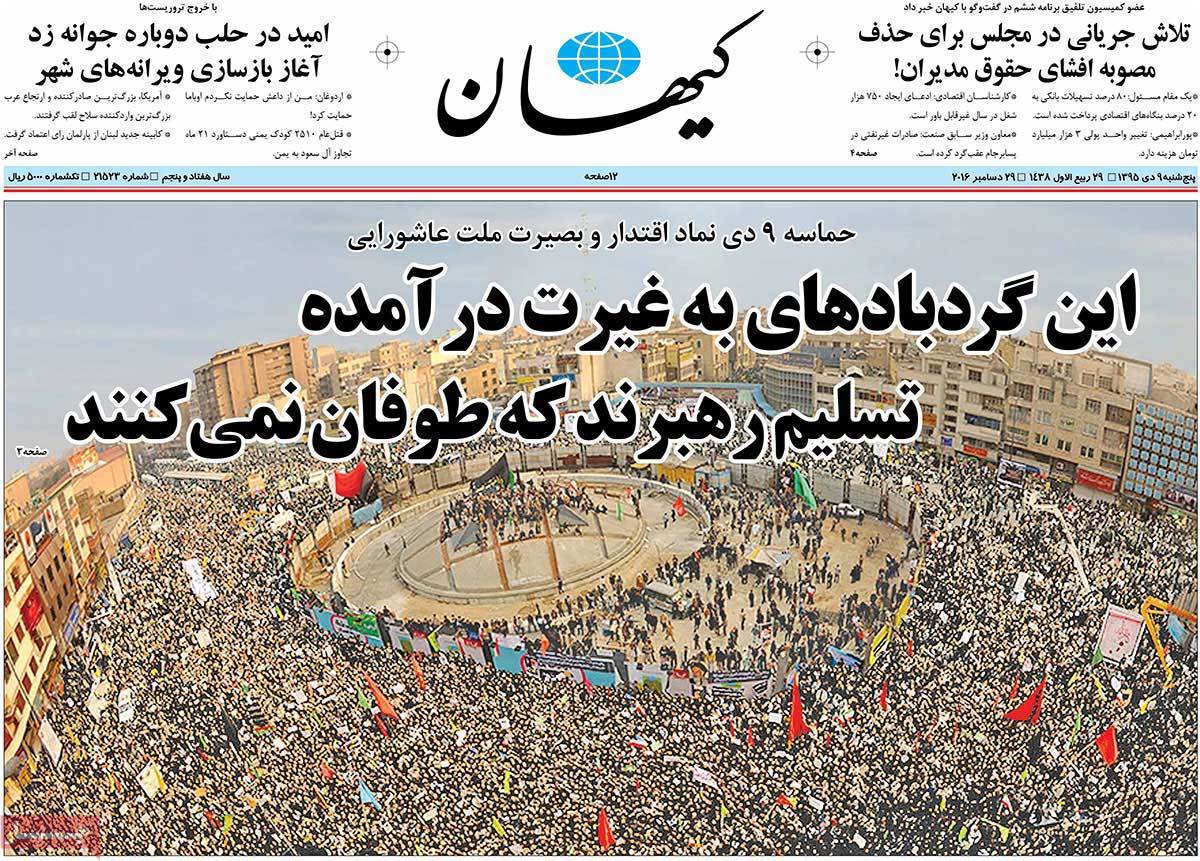 1- Parliament Speaker: People’s Political Vigilance on December 30, 2009, Was Unique in the World

2- If It Wasn’t for Leader’s Prudence in 2009 Sedition, Iran Would Have Turned Worse than Libya and Egypt: Senior Cleric 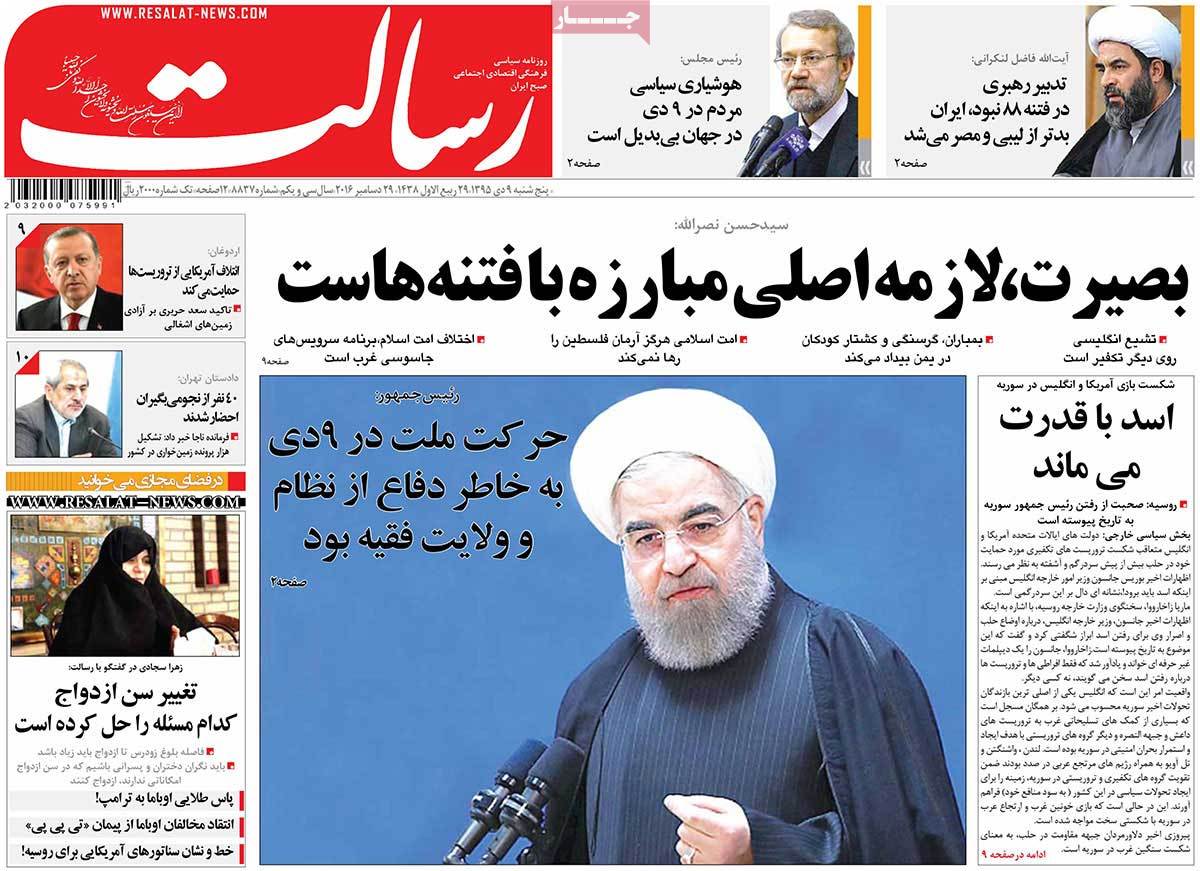 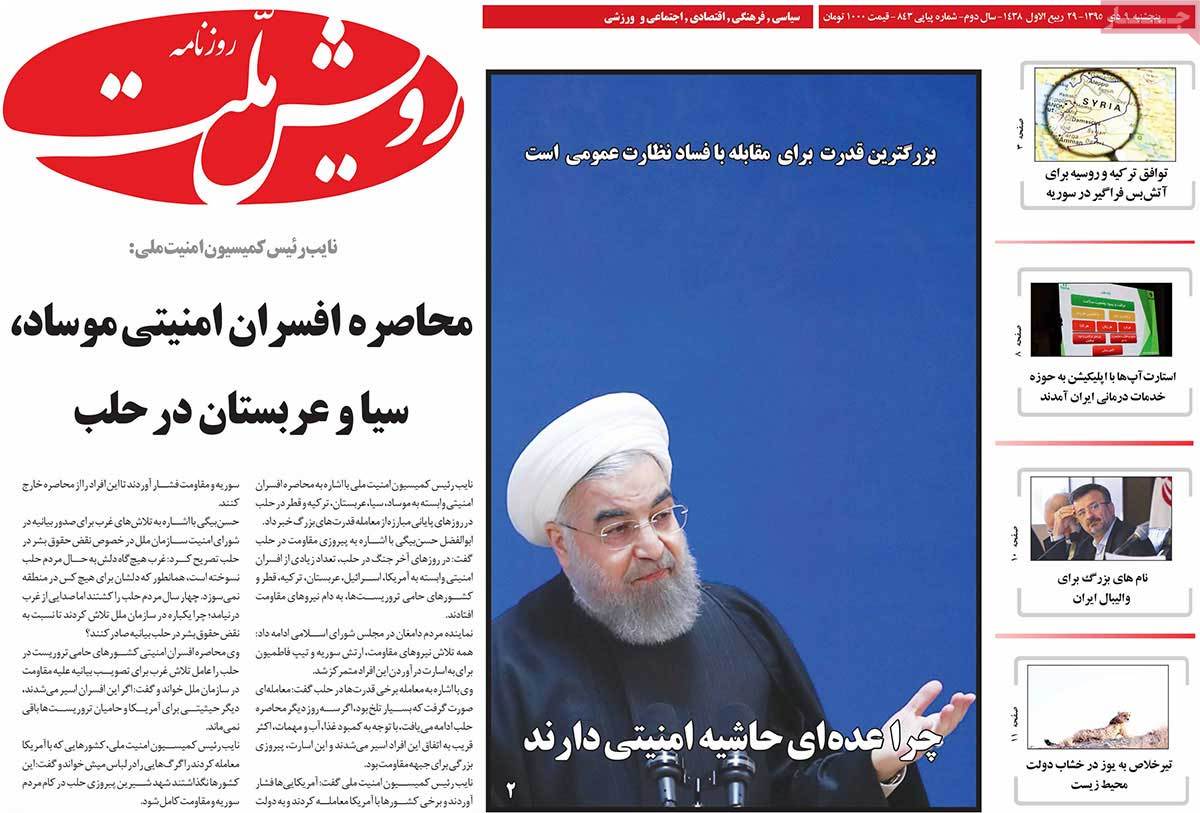 2- City Council Jurist: People Have the Right to Choose Their Transportation Vehicle, and Government Can Refuse to Interfere

3- Tehran Is More Beautiful in Christmas: An Interview with Armenian Captain of Iran’s National Football Team 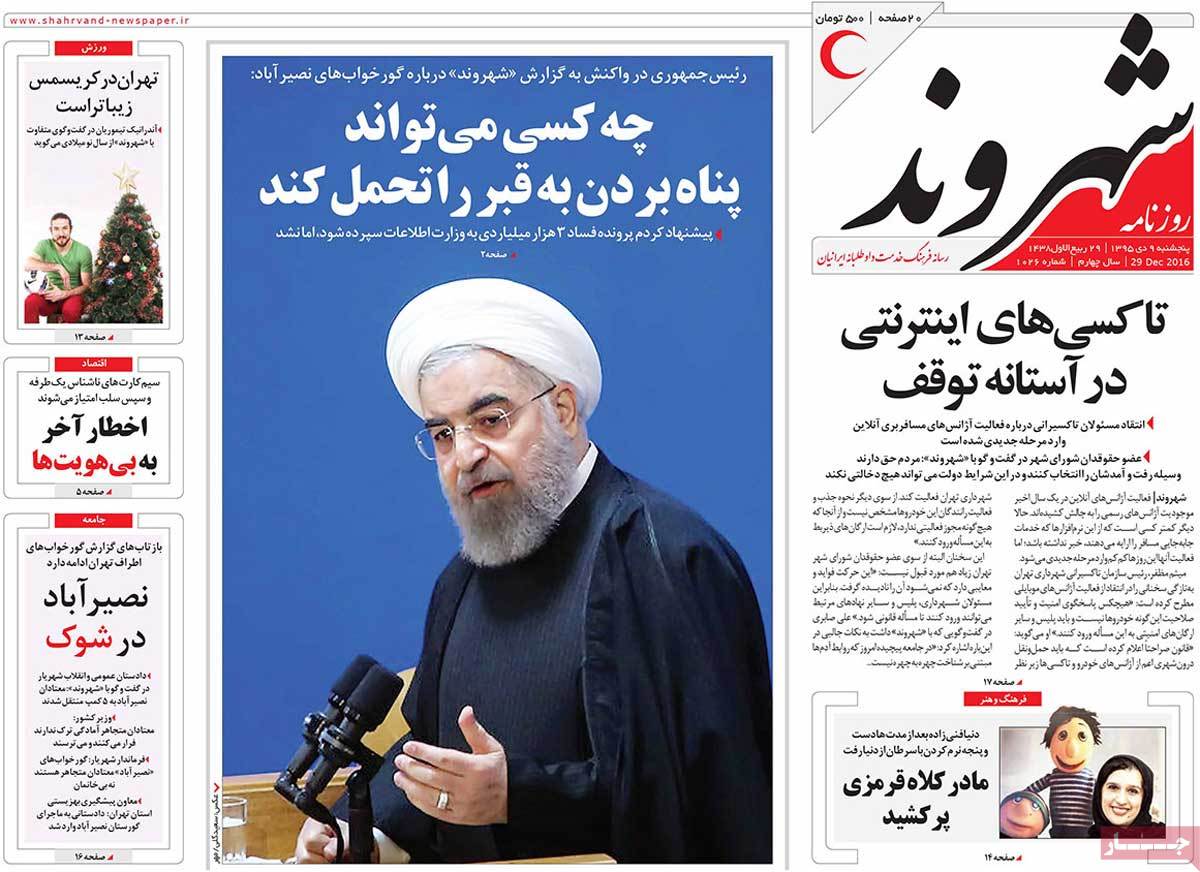 2- If Iran’s Establishment Decides So, We’ll Help: DM about Russia’s Possible Use of Nojeh Airbase 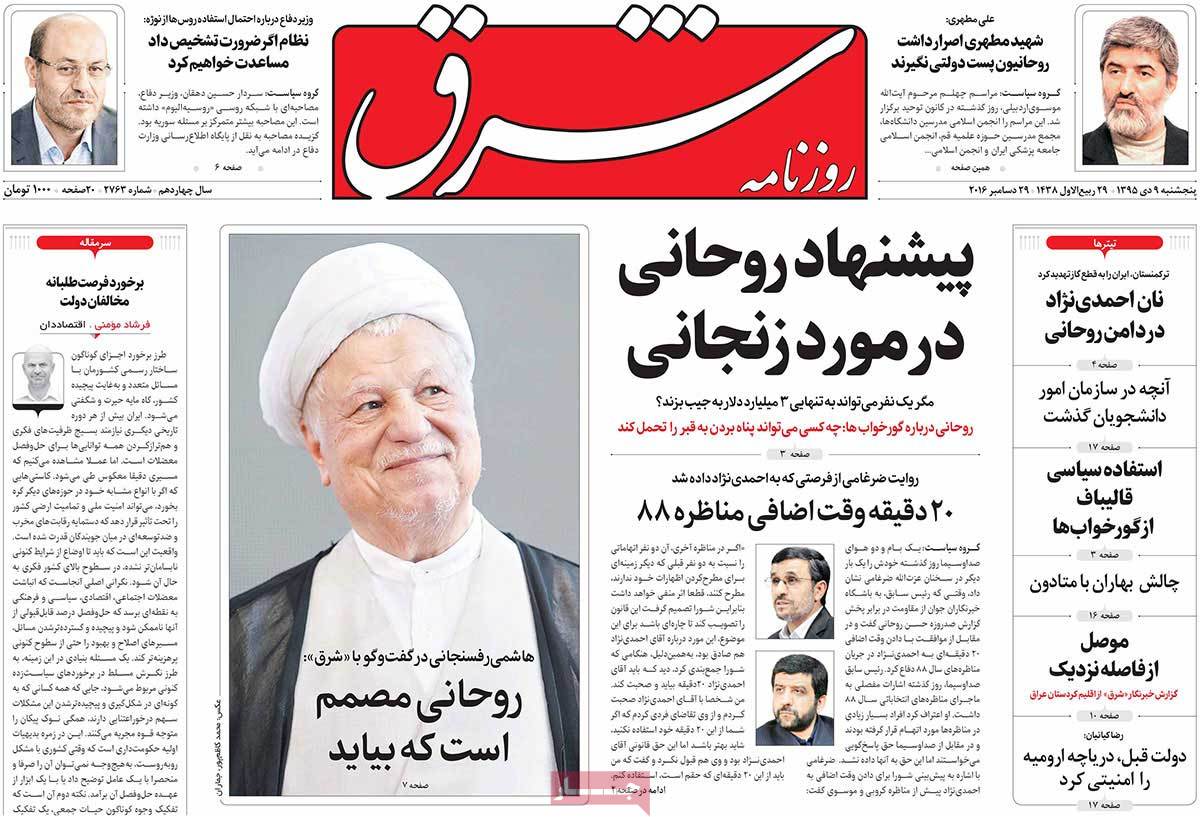 2- Erdogan Abusing Decency of Iran and Russia: Experts’ Evaluation of Turkey’s Call for Presence of Saudi Arabia and Qatar in Syria Peace Process 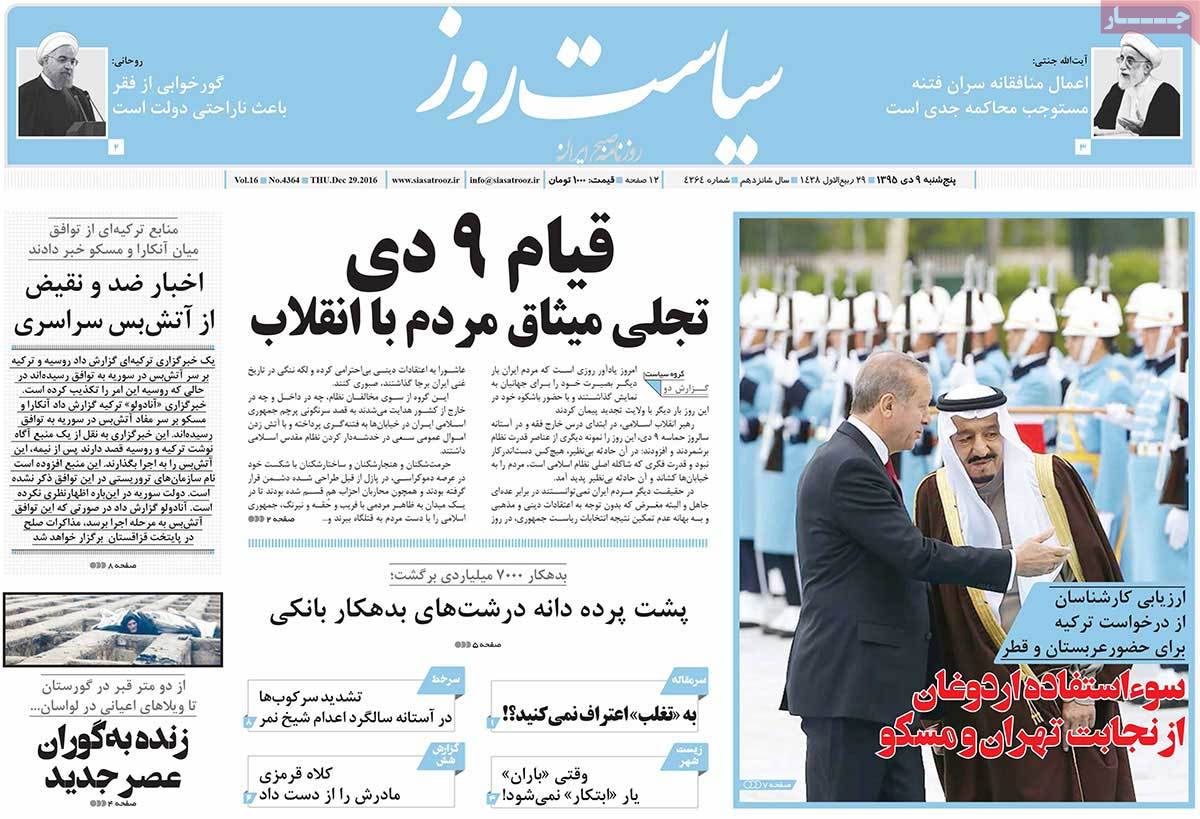 1- Sorrow of Puppets [Death of Fannizadeh] 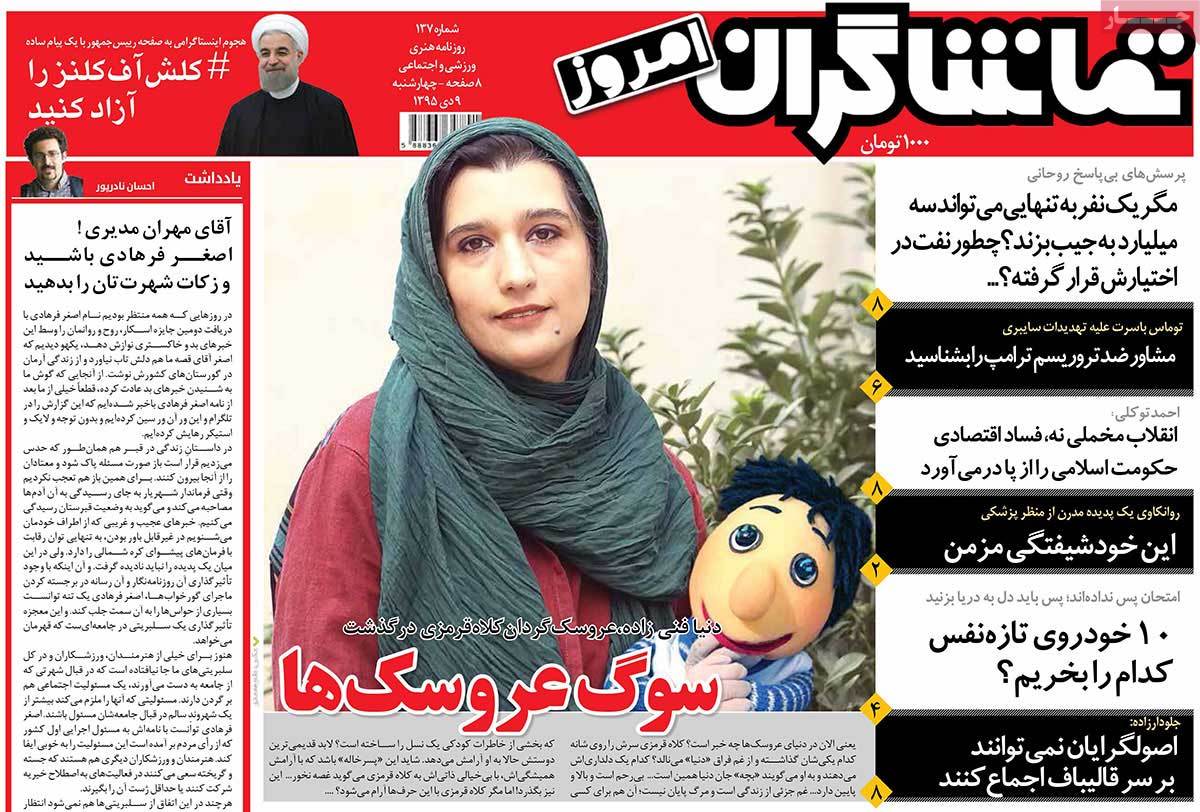