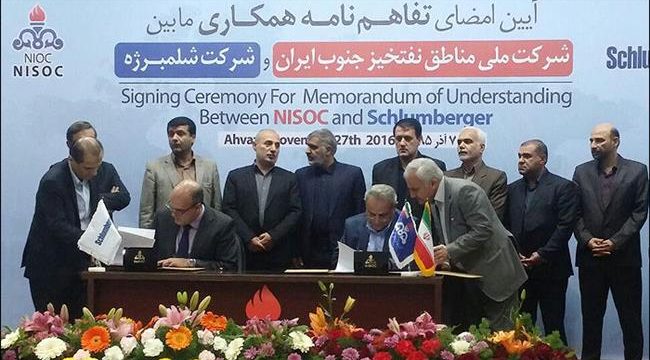 MNA| Maryam Azish: From the early days of finalizing the historical nuclear deal, a large number of directors of international companies active in oil industry have traveled to Tehran along with their respective country’s economic delegations and expressed their enthusiasm to recommence the cooperation cut-off for years.

Thanks to new model of oil contracts, dubbed as the Iran Petroleum Contract (IPC) which aimed at attracting foreign companies and investments in Iran’s oil and gas development projects, a large number of officials of the most reputable European oil companies have so far negotiated with Iranian side aimed at fostering mutual cooperation.

On Nov 2016, Iran said it has inked a memorandum of understanding (MOU) with Schlumberger – the world’s largest oil field services company – over the development of several southern oil fields.

Accordingly, the French company would be required to study the formations of Shadegan, Parsi and Rag-e Sefid oil fields in Khouzestan. The projects would be carried out within the framework of Iran’s new generation of oil contracts.

Earlier, Italy’s Eni also announced that it is looking into Iran’s post-sanctions investment prospects, but emphasized that it had to first wait for Iran’s outstanding payments over its previous investments in the country’s oil industry to be settled.

The southwestern province of Khouzestan which borders Iraq is generally considered as the heartland of Iran’s oil industry.  A province in which the world’s first commercial oil field was brought on stream back in the 19th century today hosts over 45 major oil fields and is responsible for around 80 percent of Iran’s total crude production.

On Sept 17, Parliament Speaker Ali Larijani endorsed the new model of oil contracts after a special committee in parliament approved the conformity of terms and conditions of the new contractual framework with Iran’s upstream laws and regulations.

According to media reports, the outlines of IPC, which is aimed at attracting foreign companies and investments in Iran’s oil and gas development projects following years of limited or no cooperation with multinationals and inadequate investment due to the international economic sanctions, were approved by the government in August shortly after it got the backing of so-called Resistance Economy Headquarters, a top government economic advisory body, after some amendments.

A large number of Iranian officials including Head of the Oil Contracts Revision Committee in Ministry of Petroleum Mehdi Hosseini believed that IPC is flexible in nature and any delay in its enforcement will cost the country eight to 10 billion dollars in damage a month.

Hosseini also assumed that speedy investment in projects for development of the oil and gas fields and recovery is essential in order to make up for any backwardness in the joint oil and gas reserves and avoid more violation of rights of Iranian nation.

Once the project is implemented, 56 million cubic meters will be added to Iran’s gas extraction capacity from the field which is shared with Qatar.

Under the agreement, the contractor will finance the project, thus luring billions of dollars of investment for the country.

Development of phase 11 of South Pars gas field the within framework of the new model of oil contracts underlines high share of Iranian companies in various divisions of operations.

Iran has pitched some 50 upstream oil and gas projects under the newly revised framework of its oil contracts that is hoped to sweeten the previous not-anymore-popular buyback deals.

On Nov 25, Italy’s oil giant Eni, which was involved in the development of several oil and gas projects in Iran before a series of US-led sanctions barred international oil corporations from investing in the country, announced that it has serious plans to return to Iran’s oil industry in a yet another indication of the growing interest of global energy corporations to approach the country’s post-sanctions business opportunities.

Eni CEO Claudio Descalzi told Reuters that his company would start working again in Iran when it has been repaid investments previously made and when it understands the type of contracts Teheran will be offering.

“We are still in Iran… we never left… because they owe us a load of money and we are trying to recoup it … We’ll come back when we will have recouped all our money and we know the contracts,” Descalzi said.

The deal – which Iran signed last summer with the US as well as other members of the Security Council plus Germany – envisages the removal of a series of economic sanctions against Iran in return for steps by the country to restrict certain aspects of its nuclear energy program.

The removal of the sanctions against Iran – that took effect in January – means that international companies will be now allowed to invest in the country’s oil and gas projects among other privileges outlined in the deal.

Indubitably, the new contract model unveiled by Iran’s Ministry of Petroleum for investment in its oil and gas sector, is more eye-catching to foreign investments providing longer-term commitment from both sides.