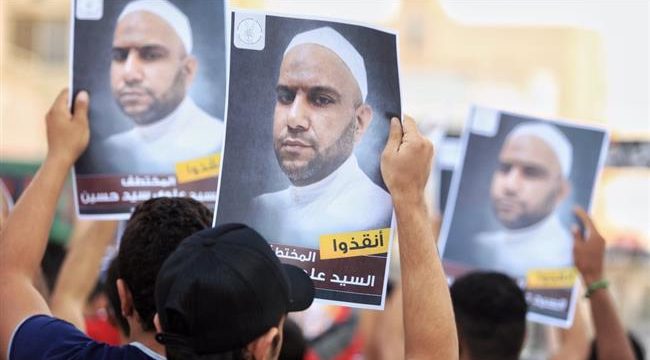 Press TV- Human Rights Watch has condemned the Bahraini regime for detaining activist Sayed Alawi, who has been held incommunicado for five weeks with no criminal charges brought against him and without any access to a lawyer or his family.

The New York-based rights group said in a statement that Manama’s refusal to provide information on the detainee’s whereabouts and the regime’s placing of him outside the protection of law amounted to enforced disappearance, which needed to be quickly probed.

“Whatever charges Alawi is going to face, his chances of a fair trial look very low and his family’s concerns for his well-being are absolutely justified,” said Joe Stork, deputy Middle East director at Human Rights Watch.

The 43-year-old activist, who works for the telecommunications company Batelco, was arrested on October 24.

Alawi’s wife, Majida Nasser, told Human Rights Watch that his family has been seeking to learn about his whereabouts, but regime authorities have either refused to provide any replies or offered contradictory and apparently inaccurate information.

Nasser said the family is aware that Alawi has been exposed to torture during detention, expressing concern for her husband’s health condition.

Bahraini man kept in Saudi jail for 10 months without charges

Meanwhile, Saudi officials have been holding a Bahraini man, identified as Khaled Abdul Nabi, in jail for 10 months without any criminal charges leveled against him.

Nabi’s family say the 37-year-old traveled to Saudi Arabia several months ago, and was arrested upon arrival at King Abdulaziz International Airport north of Jeddah. They could not get in touch with him for six months, until he called to say he was under arrest in Dammam Central Prison.

After nearly a month, Abdul Nabi made another phone call to tell his family, saying that he had been transferred to a detention facility in the Saudi capital city of Riyadh, without telling them the reason behind his arrest or detention.

Abdul Nabi’s family has urged officials at the Bahraini Foreign Ministry to secure his release, but all to no avail.

Additionally, two prominent rights groups have called on the Bahraini regime to put a quick end to its crackdown on human rights campaigners in the Persian Gulf kingdom.

On Saturday, the Observatory for the Protection of Human Rights and the World Organization Against Torture demanded immediate release of prominent activist Nabeel Rajab.

Rajab has been repeatedly detained for organizing pro-democracy demonstrations and publishing Twitter posts deemed “insulting” to the Bahraini authorities. The 52-year-old president of the Bahrain Center for Human Rights faces 15 years in jail for his criticism of ‘the Al Khalifah regime’s involvement in the Saudi military aggression against Yemen.’

The protesters are demanding that the Al Khalifah dynasty relinquish power and a just system representing all Bahrainis be established.

Manama has gone to great lengths to clamp down on dissent. On March 14, 2011, troops from Saudi Arabia and the United Arab Emirates were deployed to Bahrain to assist the Manama regime in its crackdown on peaceful protesters.

Scores of people have lost their lives and hundreds of others sustained injuries or got arrested as a result of the Al Khalifah regime’s brutal crackdown.