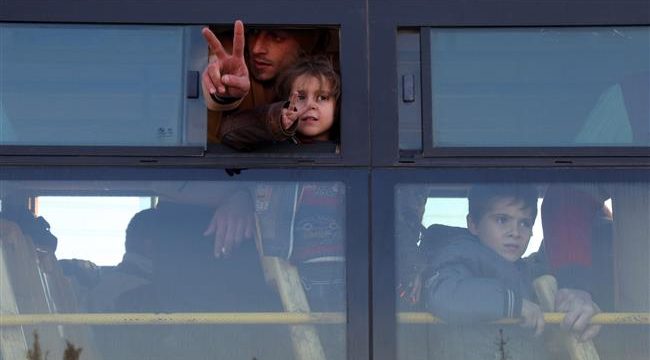 Press TV- The civilians who have recently been evacuated from the militant-besieged villages in Syria’s northwestern Idlib Province say the population in the area is deprived of almost all essentials for survival.

The people from the Shia-populated villages of al-Fua’a and Kefraya told the Tasnim news agency’s correspondent in Aleppo that they had been experiencing acute shortages of water, foodstuffs, and medical supplies since the siege started two years ago.

The report contained video footage showing buses carrying women, children, and critically-ill patients welcomed by a jubilant crowd in the northwestern Syrian city of Aleppo, to which they have been relocated under an evacuation deal.

“We were being shelled every day. Our children would go to bed starving. What else can I tell you?” a woman says in the video, weeping. “My son does not know how to eat an orange. He has forgotten this fruit, because he was two years old when the siege started.”

The woman said that one of her neighbors used to give pacifiers to their children to help them overcome their severe abdominal pain caused by hunger.

Other people who arrived from al-Fua’a and Kefraya warned of a tragic humanitarian situation unfolding in the two villages.

“We wish the siege on our fellow countrymen ends in al-Fua’a because there is a real tragedy going on there due to hunger, illness, and [the continuation of] shellfire. We can only be happy when our youths leave al-Fua’a,” said another person from the village.

The International Committee of the Red Cross (ICRC) announced on Thursday that four buses evacuated a number of the civilians from al-Fua’a and Kefraya.