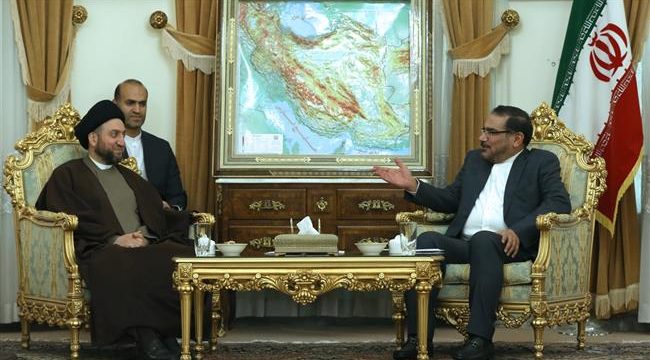 Press TV- A senior Iranian official has underlined the need for consultation and cooperation among Iraqi groups of various faiths and ethnicities, warning of foreign plots in the Arab country to cause rifts among people.

In a meeting with the head of the Iraqi National Alliance (INA), Ammar al-Hakim, in Tehran on Monday, Secretary of Iran’s Supreme National Security Council (SNSC) Ali Shamkhani urged all Iraqi groups to remain vigilant and boost their convergence to thwart such “suspicious attempts.”

“The only way to establish sustainable stability in Iraq is to popularize the process of defense and establish security,” Shamkhani said.

He hailed the recent victories of the Iraqi army soldiers and popular forces in operations to rid different locations of terrorists, particularly in the strategic northern city of Mosul.

A unified and strong campaign by all Shia, Sunni, Kurd, Turkmen and Izadi Iraqis against acts of aggression and crimes by terrorists is a clear symbol of national unity and integrity in Iraq, the SNSC secretary said.

Iraqi army and volunteer fighters have been leading a large offensive to retake Mosul since October 17. The city fell to Daesh in 2014, when the terror outfit began its campaign of death and destruction in the Arab country.

Iraqi Prime Minister Haider al-Abadi has vowed that Mosul would be fully liberated by the end of 2016.

Shamkhani also urged all Muslim countries and the international community to effectively fight Takfiri extremism and its regional supporters.

Hakim, for his part, said political integrity and national unity are the most important needs of Iraq in the country’s fight against Takfiri terrorism and the establishment of stability as well as economic and social development.

The INA head praised Iran’s continuous support for Iraq in the campaign against terrorism and said strong bonds between the Iranian and Iraqi people in addition to the two countries’ resolve have prepared unique grounds for bolstering cooperation.

On Sunday, Leader of the Islamic Revolution Ayatollah Seyyed Ali Khamenei received Hakim, who has served as the head of the INA, comprising Shia political parties, since September.

Ayatollah Khamenei said the United States has never been seeking to root out Takfiri terrorism, but it is rather making efforts to preserve some terror groups in the Middle East to advance its goals.

The Leader advised the Iraqi National Alliance not to trust the Americans, warning that Washington has always been against powerful Muslim countries such as Iraq.

The alliance, which holds the majority of seats in the Iraqi parliament, includes four political parties, namely the State of Law Coalition, the Islamic Supreme Council of Iraq, the National Reform Trend Party and the Sadrist Movement.