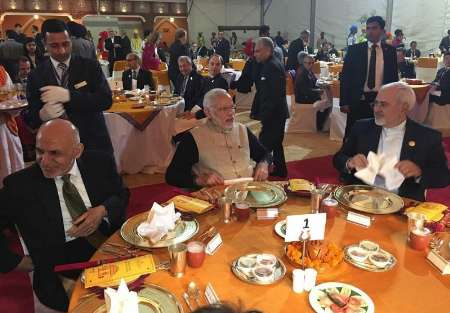 The two-day Heart of Asia Conference is being held with the aim of broadening of cooperation to help resolve and improve the security conditions of Afghanistan attended by representatives of over 30 member-states and sponsors of the conference and over 10 international and regional institutes in Amritsar region of India’s Punjab state.

The foreign minister is accompanied by a 38-member delegation from Iran’s Chamber of Commerce, 15 Iranian knowledge-based companies and 8 trade banks.

The delegation which also includes a number of industrial, commercial and scientific officials will hold talks with Indian trade officials and take part in joint economic meetings with India, China and Japan.

The Heart of Asia conference is scheduled to be held in Amritsar on December 3-4.

The sixth Heart of Asia conference is expected to see attendance of leaders from around 30 countries including US, Russia, China and Iran. The theme will be connectivity and increasing security in and around the Afghan region.

The discussions will revolve primarily on peace, cooperation and economic growth in Afghanistan and neighboring regions. India is the co-chair and host this time and Afghanistan is the permanent chair of the conference.

Zarif is to outline Iran’s policies on promotion of peace and stability in heart of Asia especially in Afghanistan during his speech in the conference.

India visit comes at the first leg of the Iranian foreign minister to Southeast of Asia. He will proceed to China and Japan from here upon the invitations of his Chinese and Japanese counterparts.

This is Zarif’s third visit to the country as foreign minister.

According to the Foreign Ministry spokesman Bahram Qasemi on Wednesday, Zarif is to hold talks with several high-ranking Chinese and Japanese officials and attend the joint trade meetings in these Asian countries.

He said Zarif would review the latest regional and international developments with senior officials during his Asian tour.