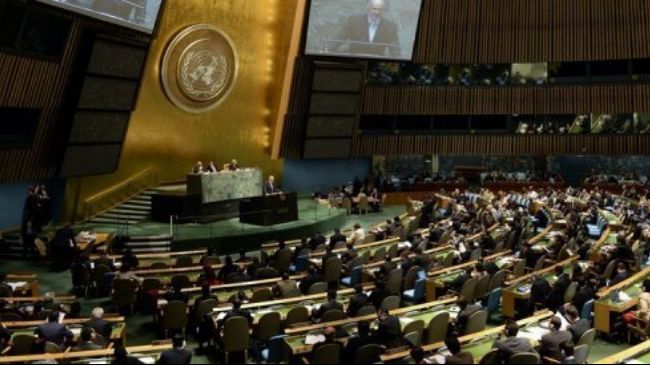 Press TV- The United Nations General Assembly has once again passed a resolution calling on Israel to withdraw from Syria’s Golan Heights, territory that the Tel Aviv regime has occupied since 1967.

The assembly adopted the resolution, which had been proposed by 37 countries, by an overwhelming majority on November 30.

The resolution also condemned Israel’s non-compliance to the Security Council Resolution 497 since 1981 until now, describing as null and void Tel Aviv’s decision issued on December 14, 1981 to impose its control over the occupied Golan Heights.

The UNGA also reemphasized the basic principle of inadmissibility of the acquisition of territories by force based on the international law and the UN Charter.

The resolution stressed that the Geneva Conventions on the protection of civilian individuals in time of war apply in the occupied Golan Heights.

Many of the states participating in the session also denounced the Israeli practices in the occupied region.

Israel seized the Golan Heights from Syria after the 1967 Six-Day War and later occupied it in a move that has never been recognized by the international community. The regime has built tens of illegal settlements in the area ever since and has used the region to carry out a number of military operations against the Syrian government.

Syria says Israel and its Western and regional allies are aiding Takfiri militant groups operating inside the Arab country. The Israeli regime has even set up field hospitals there to treat wounded Syrian militants.

The Syrian army has repeatedly seized huge quantities of Israeli-made weapons and advanced military equipment from the foreign-backed militants inside Syria.