The Wall Street Journal– OPEC representatives began meeting here this morning in an attempt to finalize a deal that would limit oil output to prop up sagging crude prices.

Ahead of a meeting that comes after months of negotiations on an output agreement, Saudi Arabian Energy Minister Khalid al-Falih—whose country is OPEC’s largest producer—said that if the cartel is able to reach an agreement, it will reach out to non-OPEC oil producers to try to secure their cooperation in limiting global production. Any final agreement “has to involve OPEC and non-OPEC,” he said.

If OPEC fails to finalize an agreement in Vienna, world oil prices would eventually recover from their current levels, he said. “I am not concerned about a no-agreement scenario,” he said.

Oil markets rallied Wednesday morning, with Brent crude futures in London jumping more than 5%, to more than $50 per barrel.

Members of the Organization of the Petroleum Exporting Countries expressed optimism that they could reach an agreement in the run-up to the meeting, which has become a test of OPEC’s ability to influence oil markets. At a time when crude is trading at less than half of 2014 prices, OPEC challenges including a Saudi hesitancy to sacrifice market share and reluctance by members including Iran, Iraq and Nigeria—which are recovering from output interruptions—to curb production have made a deal tough to finalize. 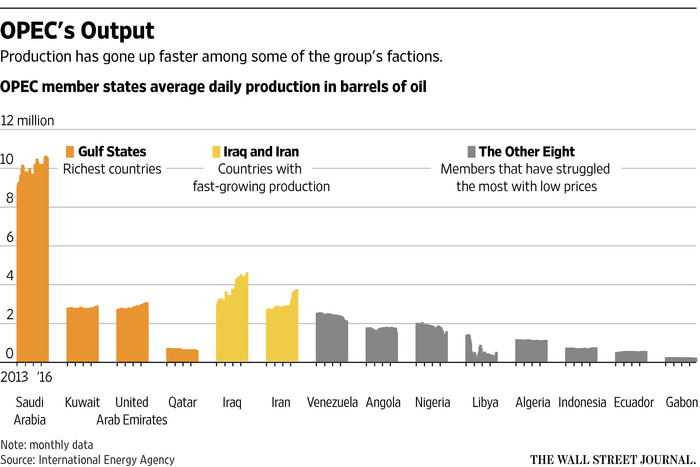 Iran’s oil minister Tuesday night he believed OPEC would clinch an agreement amid signs that his country and Iraq were looking for a compromise that satisfies Saudi Arabia’s demand for a broad-based cut.

“I have good expectations for the meeting, ”Iranian oil minister Bijan Zanganeh said, nodding when asked if proposals circulated on Tuesday night were acceptable to his country.

The proposal OPEC has been discussing would have it cut more than one million barrels a day, or more than 1% of global oil supply.

In late negotiations, officials said, Iraq said it would curb output to secure an agreement.

Iran has told fellow OPEC members it would be willing to restrict its production in early 2017 after clawing back the market share it lost during years of Western sanctions, the officials said. Mr. Zanganeh on Wednesday said his country wouldn’t agree to stop ramping up production in the short term though.

It isn’t clear how Saudi Arabia will react. Iran, which is on the opposite side of Saudi Arabia in violent conflicts in Syria and Yemen, wants to increase output to regain market share it lost when Western sanctions targeted its oil industry.

On Sunday, Saudi Arabian Energy Minister Khalid al-Falih upended expectations for the meeting when he said a production cut may not be needed to rebalance the market. Saudi officials have indicated that they want either a broad-based production cut or no deal at all.

Indonesian oil minister Ignasius Jonan said Wednesday that there were still issues to resolve that wouldn’t be easy.

One OPEC official said Saudi Deputy Crown Prince Mohammed bin Salman has played a role in the country’s new stance. He is the architect of Saudi Arabia’s military ambitions and scuttled an oil-production deal with OPEC members in April because Iran didn’t participate. Representatives of the prince didn’t respond to requests for comment.

Saudi Arabia and its Persian Gulf allies Qatar, Kuwait and the United Arab Emirates don’t want to be on the hook for the bulk of oil-output cuts.

The agreement being circulated in Vienna would ask 10 OPEC members to make a 4.5% production cut, the officials said. Libya and Nigeria would be exempted because they are increasing output after civil unrest disrupted their oil industries.

Tehran is close to agreeing to a freeze once it reaches its 3.97 million barrels a day early next year, the OPEC officials said. Iran, OPEC’s third-largest producer behind Saudi Arabia and Iraq, says it pumped 3.92 million barrels a day in October. The proposal would allow Iran to reach production levels last seen in July 2005, its highest output before Western sanctions crippled its oil industry.

Iraq acquiesced to using independent estimates of its output at 4.55 million barrels a day. But Iraq said it would only freeze from that level, not cut, the officials said.