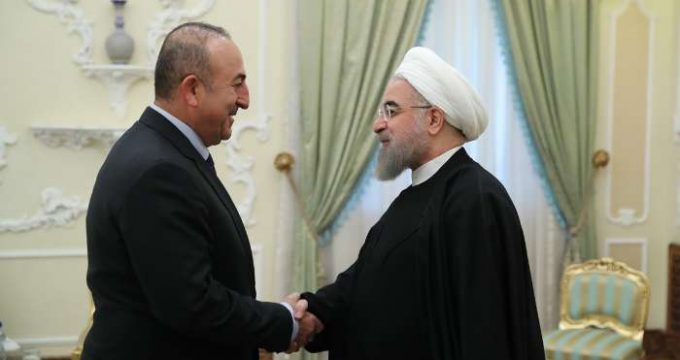 Rouhani: Iran, Turkey should provide a ‘pivot of stability in ME’

MNA – Iran’s Hassan Rouhani has said regional stability and security, especially in Iraq and Syria, should provide grounds for cooperation between Iran and Turkey.In a meeting with Turkish Foreign Minister Mevlüt Çavuşoğlu here on Saturday, Rouhani hailed regular diplomatic exchanges between Tehran and Ankara; “Iran and Turkey enjoy good relations and seek further development of cooperation,” he told the meeting.

“The public in Turkey had been faithful to democracy through their support for the incumbent government during the attempted coup in July; unfortunately, the West uses double standards on the issue of democracy and in practice it is not loyal to what it says about democracy,” he added.

Iran-Turkey cooperation would ensure peace and stability in the region, he underlined. “All major regional powers should cooperate for the resolution of crises in Iraq and Syria without foreign intervention,” Rouhani suggested.

Turkish FM for his part, offered condolences for the death of Iranian pilgrims in Hilla, Iraq, during terrorist attack and Semnan train crash, expressing gratitude for Iran’s government and nation for their support offered during the aborted coup to Turkish people.

He stressed on Iran’s constructive role in international affairs and the need for peace and battle against terrorism in the region. “Iran and Turkey seek territorial integrity and national sovereignty of Iraq and Syria as well as establishment of regional peace and stability,” Çavuşoğlu emphasized.

“Turkey welcomes establishment of a joint commission and promotion of transactions up to $30bn in the near future; Iran and Turkey should cooperate effectively in international matters especially in the Middle East,” he told the meeting.