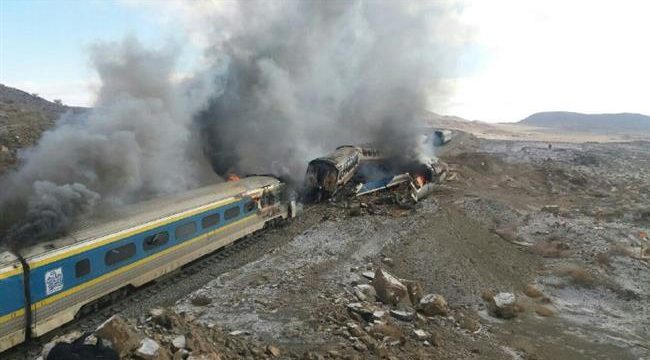 Press TV- Over 40 people have lost their lives and dozens more have been injured after two passenger trains collided at a station in Iran’s north-central province of Semnan.

According to local officials, the collision happened at the Haf-Khan station near the city of Shahroud around 7:40 a.m. local time on Friday.

Head of the Emergency Medical Service, Pir Hossein Kolivand, told the Tasnim news agency that 44 people were killed and 82 others injured in the collision, raising the death toll from an earlier estimate of 31 announced by Semnan Governor Mohammad-Reza Khabbaz.

Seven rescue teams were dispatched to the site with helicopters and ambulances. A huge fire also broke out following the accident, further slowing down relief operations in subzero temperatures.

Officials said an investigation is underway to determine the cause of the accident.

The accident happened when a passenger train that was in motion hit another that had stopped at the station about 250 kilometers east of the capital, Tehran. The collision caused four carriages to derail and catch fire.