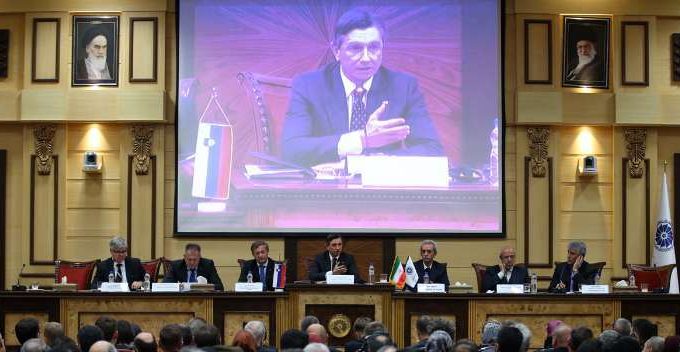 MNA– Energy Minister Chitchian has announced Iran’s readiness to cooperate with Slovenia in the energy sector as well as in industrial agricultural production.

Speaking at a session with Slovenian President Borut Pahor and his accompanying delegation at Iran Chamber of Commerce, Industries, Mines and Agriculture (ICCIMA), Hamid Chitchian said several venues exist for Tehran and Ljubljana to embark on economic cooperation and both sides are determined to seize the available opportunities.”

Boosting of relations will end in favor of both nations, noted the Iranian official adding “with a population of 80 million, Iran enjoys traditional links with nearby countries which are home to 400 million people.”

Chitchian, who heads Iran-Slovenia Joint Commission, said Iran possesses a young and well-educated nation; “several millions of students graduate from Iranian universities every year 250 thousand of which complete their studies in technical and engineering fields.”

He went on to expound that Iran could play an influential role in production of industrial, agricultural and energy products; “Slovenia, in turn, possesses excellent industries in auto industry, pharmaceutical, heavy machinery and hydro turbine areas,” underlined the official.

Hamid Chitchian, while pointing to proper grounds for cooperation between the two states, said “not only can industry owners and businessmen of both sides launch joint cooperation, but they also can conduct activities in third-party countries.”

Iran’s energy minister further reassured that all trade and economic ties between the two countries will be fully supported and called for reinvigoration of present relations as well as taking steps towards strengthening of Tehran-Ljubljana cooperation at regional and international levels.