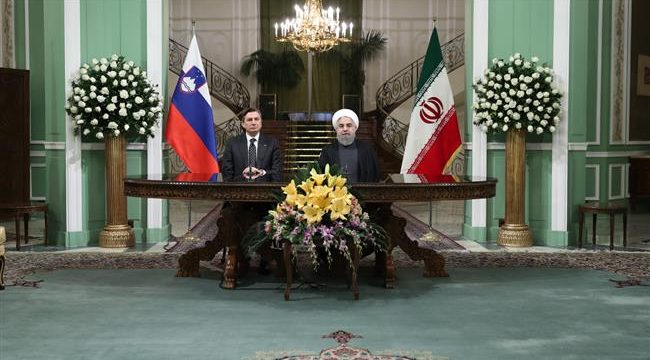 Press TV- Iran and the European Union (EU) are resolved to “strengthen” a nuclear agreement between the Islamic Republic and world powers, says the Iranian president.

“With all their might, Iran and the European Union are seeking to strengthen this important multilateral agreement and to use the post-JCPOA opportunities,” President Hassan Rouhani made at a joint press conference with his visiting Slovenian counterpart Borut Pahor on Tuesday.

Pahor has traveled to the Iranian capital at the head of a large economic delegation.

Known as the Joint Comprehensive Plan of Action (JCPOA), the deal was struck in July 2015 between Iran and the P5+1 group of countries, namely the US, Britain, Russia, France, China, plus Germany. It introduced certain restrictions on Iran’s nuclear activities in exchange for the lifting of all nuclear-related sanctions against the Islamic Republic. There has been speculation that an incoming US administration may violate or unilaterally scrap it.

Elsewhere in his remarks, President Rouhani said, “The Islamic Republic attaches importance to [its] EU ties, and this meeting is a step toward invigorating relations with the EU as well as with Slovenia.”

The Iranian chief executive said the visit by Pahor, the first one in 25 years, and the reopening of the Slovenian Embassy in Tehran, which has been scheduled for Wednesday, indicate the countries’ “strong resolve” to develop bilateral ties.

Slovenia’s Foreign Ministry announced in March 2013 that the country had decided to shrink its diplomatic network as part of general austerity measures and was closing its embassy in Tehran in response to the then-difficult financial and economic situation in Slovenia.

During the Tuesday meeting, Iran and Slovenia signed three memoranda of understanding on cooperation in the areas of economy, telecommunication, and nanotechnology.

For his part, Pahor hailed Iran’s commitment to the JCPOA, urging all concerned parties to live up to their obligations as per the deal, which he said serves as a sign that all international conflicts can be resolved through diplomacy and negotiation.

He said the visit at the head of the economic delegation indicated that a “new chapter” had opened in relations with Iran.

Pahor communicated his country’s determination to elevate the ties to the premium level and increase commercial transactions with Iran.

The Slovenian head of state also extended an invitation to Rouhani to visit Slovenia in the future.