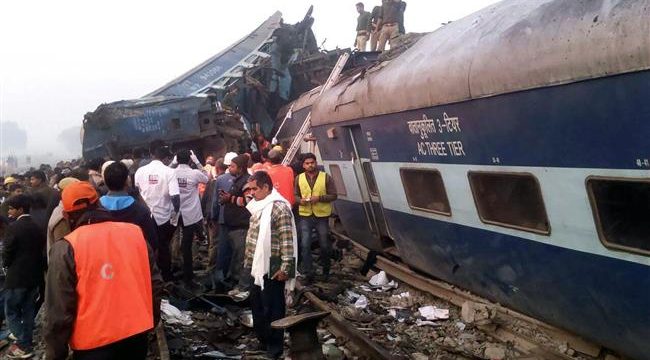 Press TV- At least 120 people have lost their lives and more than 200 others sustained injuries in a train derailment accident in India’s northern state of Uttar Pradesh.

The tragedy happened in the early hours of Sunday when most passengers were sleeping. 14 coaches of the Patna-Indore express train came off the track near Pukhrayan area in Kanpur Dehat district, according to railway officials.

The train was running from Patna, the capital of the eastern state of Bihar to Indore, a city in the west-central state of Madhya Pradesh.

The death toll is expected to rise as officials say many passengers are still trapped inside the carriages, with police and emergency crew working to pull the victims from the twisted wreckage.

The injured were transported to local hospitals and the stranded passengers taken to a nearby station from where a special train would eventually take them to Patna.

Though the cause of the derailment was not known immediately, sources say the nature and timing show that the accident was probably caused by a rail fracture.

Prime Minister Narendra Modi has offered his sympathies to those affected by the incident. “Anguished beyond words on the loss of lives due to the derailing of the Patna-Indore express. My thoughts are with the bereaved families,” he tweeted.

Railway Minister Suresh Prabhu has also expressed grief over the incident and urged immediate help for the stranded passengers.

Between $3,000 and $5,000 will be given to the departed’s kin as ex-gratia, Prabhu tweeted, adding that the amount is in addition to the compensation that will be available through the Railway Claims Tribunal.

About 23 million passengers use India’s vast rail network every day, which is the fourth largest in the world.

Train accidents are common in the country, where much of the railway equipment is obsolete. Last year, a train derailment, also in Uttar Pradesh, left some 40 people dead and 150 others injured.