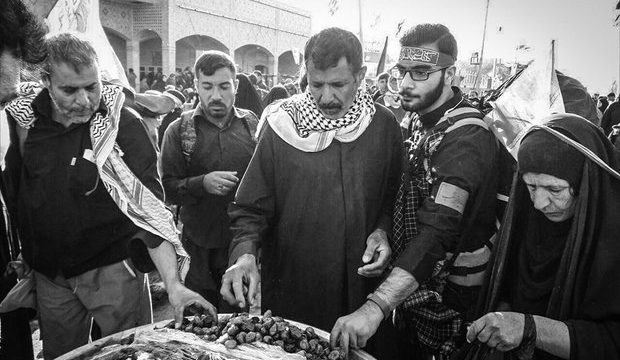 For the Love of Hussain

Alwaght – For a traveller, a cup of water to quench thirst or a piece of bread to satiate a grumbling stomach is worthy of a ‘thank you’. But for those visiting the shrine of Imam Hussain in the holy city of Karbala, gratitude is a reciprocal sentiment that can be caught both in the eyes of those giving out food and those receiving it.

A warm cup of tea to rehydrate after long walks under the sun or perhaps a plate of much needed source of energy may not amount to much on a normal day but their value increases during such a march.

For days, even weeks, millions of visitors walk toward the holy city of Karbala from across Iraq to commemorate Arbaeen. Along the way, food is distributed, accommodation is provided, and even medical services are offered gratis. But where do all of these services come from?

Believe it or not, they are provided for the love of Imam Hussain (a.s).

The locals are glad to be in the service of Imam Hussain’s visitors, who receive great merit for their journey.

According to tradition, Imam Sadiq, descendent of Imam Hussain (a.s.) said: ‘When a Shia knows Imam Husain’s (a.s.) right over the people and leaves his house for Imam’s (a.s.) ziarat (pilgrimage) in this condition, without any pride and conceit, then a thousand angels accompany him from the right, with another thousand angels on the left. And he will be rewarded as if he has performed one thousand Hajj and one thousand Umrah with a prophet or with the successor (wasi) of a prophet.’ (Behaarul Anwar, vol 101, pg 91, tradition 33)

Since visitors on the journey are regarded as blessed, so Shiite Muslims from around the world donate money to cover food expenses, lodgings, and even medication. People volunteer to partake in attending the pilgrims. For the most part, they are driven by the ambition to serve Imam Hussain by serving his visitors.

In 2015, more than one thousand food stops were set up along the road to Karbala.

Theology lecturer Sayed Mahdi al-Modarresi wrote in an article for the Huffington Post about the Arbaeen experience.

“Arbaeen should be listed in the Guinness Book of World Records in several categories,” he stated.

This mass convergence on the holy city of Karbala, where the shrine of the Imam who was killed fighting for the sake of Islam is located, is in itself a show of love, the kind of love that is rekindled at this time of every year.

For servers, participating in this demonstration of remembrance is an act of faith and whatever they offer, they offer for the love of Hussain.