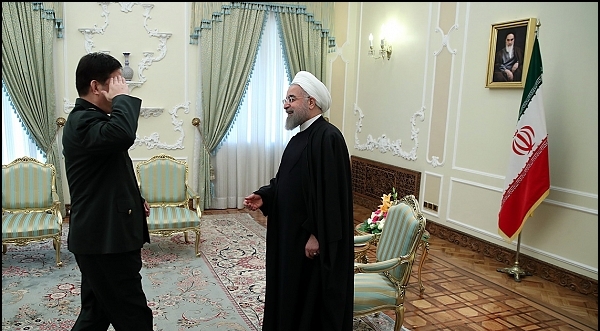 FNA- Iranian President Hassan Rouhani in a meeting with Chinese Defense Minister General Chang Wanquan on Tuesday underlined the necessity for strengthened defense and anti-terrorism cooperation between the two countries.

“The two countries’ cooperation should increase to confront and fight against the big danger of terrorism,” President Rouhani said during the meeting in Tehran today.

Noting that the Iranian and Chinese military officials’ reciprocal meetings will strengthen mutual cooperation in defensive fields, he said, “The Islamic Republic of Iran is fully ready to implement all agreements with China based on the roadmap of cooperation, and the defense field is an important part of this cooperation.”

Chang, for his part, described Iran as the biggest and most important Muslim state in the region with most influence, and said, “Cooperation between the two countries in the fight against terrorism will be highly important.”

The two officials’ remarks came after Chief of Staff of the Iranian Armed Forces Major General Mohammad Hossein Baqeri said Tehran is ready to share with China its experiences in fighting against the terrorist groups in Iraq and Syria.

“We told the Chinese side that the countries’ national sovereignty is vitally important to us and therefore, the Islamic Republic of Iran is ready to share with China the experiences it has gained through joint cooperation with the honorable governments of Syria and Iraq as well as its experience in establishing and developing security in different bordering areas of the Islamic Republic,” General Baqeri told reporters after meeting with General Chang in Tehran on Monday.

He added that Iran is also ready to cooperate and exchange its experience with China in sea and air battles as well as confronting threats to nations’ sovereignty.

Baqeri also referred to the Chinese side’s willingness to cooperate with Iran, and said they pointed to the common threats posed by the world powers and the terrorists to the two countries and stressed that Beijing’s cooperation with Tehran serves the interests of both nations.