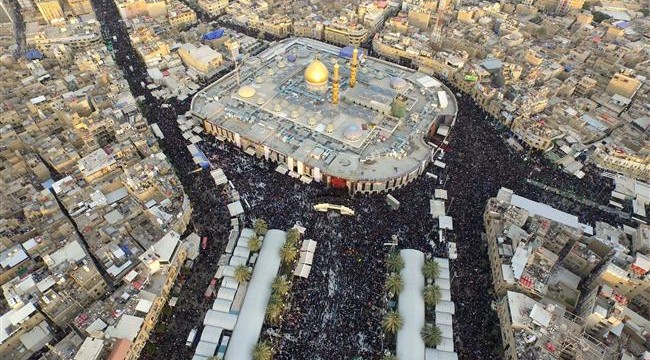 Why Muslims hold the biggest human gathering under the threat of ISIS in Iraq?

American Herald Tribune|Milad Amini Movahhed: Visiting Aba Abd-Allah is a good evidence of esteeming and honoring the divine rituals, and display love and friendship with prophet’s household, according to the Quranic verse of “Mavaddat”.

Presenting and attendance million of Shias at Arbaeen, create a massive and international unity among Shias. This capacity can be useful for huge cultural action.

“Mashrigh” and “Tasnim” report that different religions ever require their followers to attend in specific days in the year for solidarity and correlation between followers to identify the social stream. This kind of attendance is a good publicity of that social stream, and influences the international community.

For example Christians celebrate “Easter” as the most important religious day with a long history every year.

This day is a holiday in Christian’s calendar, and followers of Jesus Christ hold various ceremonies and celebration in the church.

“Purim” is a great religious festival in Jewish religion. Jews have named the fourteenth and fifteenth day of Adar in Hebrew calendar “Purim”, and celebrate it.

Jews hold celebration in “Synagogue” with reading the book “Esther”. After ceremonies, children and youth wear the colorful clothes and masks, and launch the carnival of joy in occupied Palestine territories and Jewish cities. This ceremony is advertised extensively by the Jewish dictatorial media..

About 5.5 million Muslims from all over the world travel to Mecca, Saudi Arabia in “Hajj days” and perform Hajj. But ” Pure    Mohammadi Islam” and “Alavi education” is not advertised and explained properly in Hajj because of the restrictive policy of Saudi regime.

Imam Reza, peace be upon him, stated:  If the beauty of Islam is heard by others, they all will follow wholeheartedly the prophet’s household inevitably.

Attending million of Shias in Arbaeen create a massive and international unity among Shias .

Karbala can be a “symbol” of unity and allegiance to Imam, that has the “world’s effects”. The start of Husseini Magnetic Attraction is in “Arbaeen”. This is the magnetic that exists in my and your heart over the centuries.

So if we can’t publish the Shia massage efficiently in Hajj, we can universalize it in Shia glorious presence in the Husseini massive rally.

In fact the Hajj pilgrimage for Imam Hussein followers is in Karbala, their try between Safa and Marvah in the ” Beyn Al-Haramain”, and their “Ihram clothes” is the “mourning clothes for Aba Abd-Allah”.

Walking to shrines is topical

Imam Hassan Askari, peace be upon him, mentioned that one of the real believer’s sign is walking to visit Imam Hussein in Arbaeen.

Imam Sadigh, peace be upon him, told to one of his followers: Visit Imam Hussein’s shrine, and don’t give it up. I asked: What is the reward for visiting him? Imam –pbuh- stated: When you walk to visit Imam Hussein, Allah gives you a reward and removes your guilt, and raises your grade.

At the other time, Imam Sadigh said: If someone goes out of his home and walks to visit Imam Hussein’s shrine, Allah gives him a reward and removes him guilt for each step to visit Aba Abd-Allah, when he reaches to shrine, Allah considers him among righteous favorites. When his rites finish, Allah registers him among success, when he is coming back an angel of God stays on him and tells: The messenger of Allah says Hello and gives tidings to you that all your faults are forgiven, start again your actions.

Walking tradition has an old history.

In a way, walking tradition for Imam Hussein in Arbaien has an old history. Walking to visit Karbala was customary at Sheikh

Ansary’s time. But it was forgotten for a long time. It revives again by “Sheikh Mirza Hussein Noori”. He walked to visit Aba Abd-Allah in 1319 (Hegira) for the last time.

Although visiting Imam Hussein s shrine was often difficult, and pilgrims were not safe and secure, but they were willing to take risks and had an audience to Imam Hussein in Arbaeen.

At that time with full of great interest and knowledge, in the way “Hussein path” that leads to Karbala, Shias called each other just with “Hussein visitors” (zayer Al-Hussein), or “Hussein server” (khadem Ol-Hussein), that is a symbol of Islamic life style.

Pilgrims of this holy and spiritual journey have a lot of blessing and gifts from God, such as: the nice spiritual state with “holy Sayyed Al-Shohada” – generous dealing with pilgrims entertaining and receiving by Hussein servers- sacrificing and respecting for each other- treating elders and sayyeds kindly and considerately- visiting the Imam Hussein’s holy shrine in Arbaeen.

Visiting Aba Abd-Allah is a good evidence of esteeming and honoring the divine rituals, and display love and friendship with prophet’s household, according to the Quranic verse of “Mavaddat”.

Imam Hussein’s holy shrine visitors enter into heaven before all, their guilt is disappeared, their life will be long, and God provides for them and removes their sadness and sorrow.

Of course if this old tradition that is established again after destruction of Iraqi dictator, not to be cultural pathology, it will certainly have the negative effects.

Because every phenomenon is threatened, it seems if this pilgrimage tradition becomes a primer to the cultural work, it will be more effective and blessings than today.