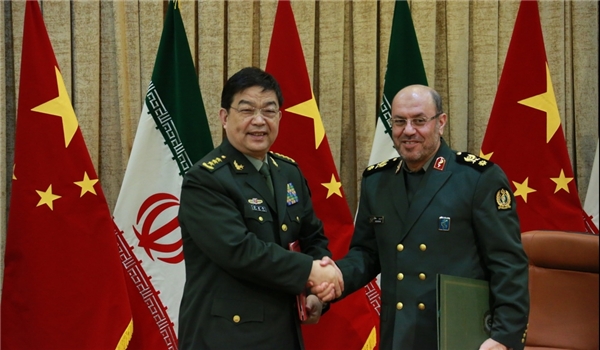 FNA- Iranian Defense Minister Brigadier General Hossein Dehqan and his Chinese counterpart General Chang Wanquan in a meeting in Tehran on Monday signed an agreement to further develop defense and military cooperation between the two countries.

Expansion of defense-military cooperation, exchange of experience in military fields, specially in training, and all-out campaign against terrorism and insecurity in the region are among the most important contents of the agreement.

During the meeting, General Dehqan underlined that defense and military cooperation between Iran and China guarantees peace and security in the region and the world, and said, “Enhancement of long-term defense-military relations and cooperation with China is among the main priorities of the Islamic Republic of Iran’s defensive diplomacy.”

Chang, for his part, described the defense-military cooperation with Iran as good, and underscored the necessity for the expansion and deepening of bilateral ties and precise implementation of defense and military agreements between the two countries.

Dehqan and Chang in a meeting in Beijing in May 2014 had underlined development of cooperation between the two countries in military and defensive fields.

“The age-old and historical relations between the two countries which date back to over 2000 years ago are full of instances of cooperation in cultural, economic, industrial and technological arenas,” Dehqan said.

He referred to the two countries’ abundant advantages and potentials in different fields, and laid emphasis on the consolidation of the bilateral relations, specially in defensive, military and security areas.

Elsewhere, he described a nuclear-arms-free Middle-East as one of Iran’s strategic goals, and said the disarming the Zionist regime of its nuclear arsenals is demanded by all the regional nations and states.

Chang, for his part, reiterated his country’s enthusiasm for the reinvigoration of all-out cooperation with Iran, and said, “Given Iran and China’s common views over many important political-security, regional and international issues, Beijing assumes Tehran as its strategic partner.”