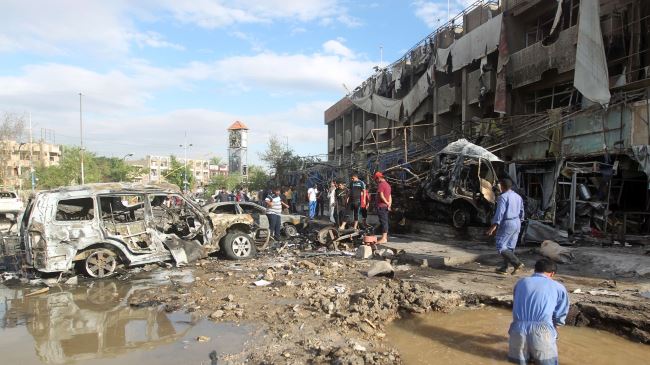 Press TV- At least 11 civilians have lost their lives and nearly three dozen others sustained injuries in a spate of bomb attacks that ripped through residential and commercial neighborhoods in and around the Iraqi capital, Baghdad, besides other areas in the country.

A security source, speaking on condition of anonymity, said three people were killed and eight others injured when a car bomb went off in the Kamaliya neighborhood of southeastern Baghdad on Sunday, Arabic-language al-Mawazin news agency reported.

Security forces immediately cordoned off the site of the attack, and ambulance workers ferried the wounded to a nearby hospital.

Two civilians also died and eight others were injured when an improvised explosive device went off near a commercial district in the town of Abu Ghraib, some 25 kilometers west of Baghdad.

Additionally, one civilian lost his life and five others suffered injuries when a car bomb struck Baghdad’s northeastern district of Sadr City.

Also on Sunday, a bomb exploded as a car was travelling along Muhammad Qasim road in eastern Baghdad, leaving one person dead and three others injured. The explosive device had apparently been placed under the vehicle.

Earlier, a civilian was killed and three others injured when a car rigged with explosives was detonated in the al-Obaidi neighborhood of eastern Baghdad.

Separately, four people were injured when a bomb attack struck the capital’s northern neighborhood of Sha’ab.

Elsewhere in the town of Hawijah, located about 282 kilometers north of the capital, two civilians were killed and seven others injured in a bomb explosion that targeted displaced families.

An improvised explosive device also went off in farming lands southwest of the city of Baqubah, located some 50 kilometers northeast of Baghdad, leaving one civilian dead and another injured.

The United Nations Assistance Mission for Iraq (UNAMI) says a total of 1,792 Iraqis were killed and 1,358 others injured in acts of terrorism, violence and armed conflict in October.

According to the UN mission, the number of civilian fatalities stood at 1,120. Violence also claimed the lives of 672 members of the Iraqi security forces. A great portion of the fatalities was recorded in the capital province of Baghdad, where 268 civilians were killed.