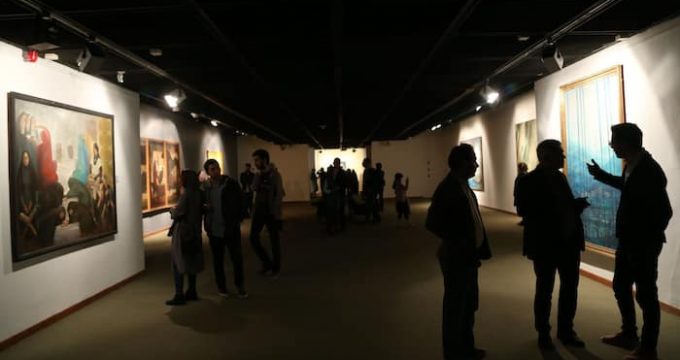 Financial Times| Najmeh Bozorgmehr: The Land of the Solidities, an abstract oil painting of a fully veiled Arab woman by Mounirah Mosly, a Saudi artist, hangs near an untiled piece by the late Sohrab Sepehri, one of Iran’s best known poets and painters.

The fact that the works are displayed at the same exhibition in Tehran provides a rare show of bonhomie in a region blighted by conflict and bitter rivalries. For Iran the event is unique — it is the first time that the predominantly Persian state has hosted such a public display of Arab art.

The organisers touted it as an opportunity to use culture to bridge some of the regional divides, and it is notable that two works from Saudi Arabia — Iran’s regional foe — are on the display.

Karim Sultan, curator at the Sharjah-based Barjeel Art Foundation that put on The Sea Suspended exhibition, says the exhibition is about “continuing the conversation with the Arab world.”

“In this crisis-hit region where we live, an art dialogue is the responsibility of artists, despite all the tensions between us and our neighbours,” Mr Rasoulof says.

Riyadh cut diplomatic ties with the Islamic republic in January after its embassy in Tehran was ransacked by Iranian hardliners protesting against the Saudi government’s execution of a dissident Shia cleric. Iran and Saudi Arabia — the region’s dominant Shia and Sunni powers respectively — back rival sides in conflicts in Syria and Yemen as they fight proxy wars, and are blamed for stoking sectarian tensions across the Arab world.

In the volatile environment, Sadegh Kharrazi, a renowned Iranian art collector and a former ambassador to the UN and France, says culture can be a tool of diplomacy.

The exhibition — held at the state-run Tehran Museum of Contemporary Art — was “a step forward for helping make people in the region closer to each other,” he says.

“Tensions should decrease and artists are well-positioned to fill the gap between people in the region and politicians,” he adds.

The exhibition includes 40 paintings covering a period from the 1940s to 1990s by Arab artists from countries including Egypt, Morocco, Iraq, the United Arab Emirates and Algeria. There are an equal number of Iranian pieces on display.

The theme of the exhibition reflects on the emergence of abstract Arab art and the artists’ experiences of everyday life.

It is being held at a time when President Hassan Rouhani’s centrist government is seeking to repair the nation’s image and re-engage with the world following its landmark nuclear agreement last year that saw many western sanctions on the Islamic republic lifted.

Yet not all share the government’s enthusiasm for culture.

Regime hardliners — based in the elite Revolutionary Guards, the judiciary and the clergy — have put increasing pressure on Mr Rouhani to keep a lid on cultural freedom. Their resistance forced the president to dismiss his pro-reform culture minister, Ali Jannati, last month.

It is not yet clear yet if the pressure will cause the government to be more restrictive in the cultural sphere as the country gears up for elections next year, with Mr Rouhani hoping to secure a second term.

And for now, the decisions taken under the former culture minister appear to be continuing.

Iran will send 30 works from its large collection of western modern artists to be exhibited at Berlin’s Gemäldegalerie museum in December, and then to the MAXXI museum in Rome, where they will be on display until August 2017.

It is the first time the Tehran Museum of Contemporary Art has allowed some of the more than 1,500 western artworks it owns go on display outside the republic. They were bought before the 1979 Islamic revolution on the orders of Queen Farah, wife of the last Shah of Iran.

The collection remains the most valuable western visual art collection outside Europe and North America, Iranian experts say, with the largest element being post-second world war works by US expressionist artists, including Jackson Pollock and Mark Rothko.

But the nuclear accord, which came into effect in January, was not sealed in time for an exhibition in the US, says Majid Mollanorouzy, director of the Tehran museum.

“We decided to choose countries with which we have less political tensions,” he says.

This article has been updated to reflect the fact that Barjeel Art is based in Sharjah not Dubai.