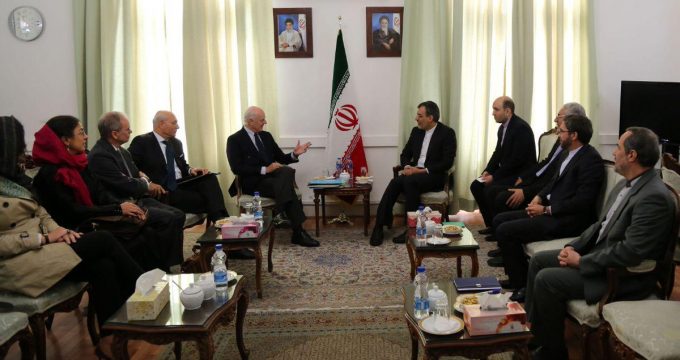 De Mistura arrived in the Iranian capital on Saturday. He had been invited by Hossein Jaberi Ansari, Iran’s deputy foreign minister for Arab and African affairs, whom he will meet on Saturday.

The UN official has traveled to Iran several times since his appointment as the UN’s envoy for Syria to hold talks with Iranian officials. He last visited Iran in April.

The emissary regularly travels to regional countries to help bring about convergence that could pave the way for the resolution of the Syrian conflict, which has, according to his estimates, killed some 400,000 people so far.

Earlier in the month, he had met with the European Union (EU)’s foreign policy chief Federica Mogherini in Brussels.

Mogherini, too, has previously visited Iran to address the regional situation.

The Syrian government has been fighting a foreign-sponsored militancy since 2011. The UN has been attempting to put an end to the fighting including by assigning special envoys for the Arab country. Such attempts, however, have so far been largely fruitless.

Late last month, de Mistura warned that ongoing attempts by Takfiri terrorists to break a government siege of the western part of the city of Aleppo could amount to war crimes. He voiced his shock at the indiscriminate use of heavy weapons by the militants during their onslaught on western Aleppo’s civilian suburbs.