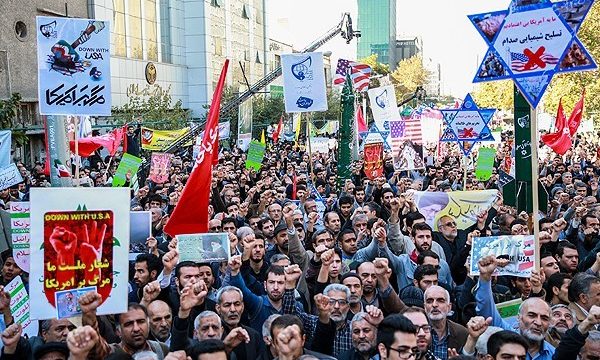 IRNA– Iran reaffirmed campaign against global arrogance in a ceremony to mark anniversary of capture of the den of spies in Tehran, the US embassy.

Iranian students marked the anniversary and issued a statement at the end of a rally reminiscent of demonstrations held on November 4, 1979, to support the students proclaimed followers of the late Imam Khomeini for capture of the den of spies in Tehran.

They reaffirmed campaign against global arrogance to ‘the last person and to the last breath.’

The statement cited the remarks made by Supreme Leader that Iran will steer clear of the United States and that negotiations with the US about the nuclear dispute brought nothing.

The Supreme Leader said that the US officials are liar, deceitful and break their promises and not trustworthy for negotiations.

The statement cautioned Iranian officials against trusting the US government, advising them to exercise vigilance against conspiracy of the United States.

The statement said that the United States supports anti-Iran warmongering by the Zionist and Saudi regimes, and that any friendly approach towards the US government will be regarded as betrayal of Islam, the cause of Islamic Revolution, the nation and the blood of martyrs.